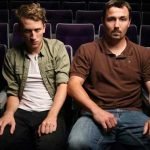 I was joking tonight with a friend of mine who lives in a small town and will be hosting a girl he’s shidduch dating for about a week and about how the Rabbi wouldn’t be so into him going to the movies with her because it’s untznius. He said he doesn’t go to movies anyway, but that the Rabbi wasn’t necessarily against movies per se, but he didn’t really get what I meant.

Many people think that movies are assur because of the untznius images and other non-kosher items displayed on screen, but this is not the real reason why going to movies is against the mesorah and God himself.The real reason is random elbow play.

For some reason, probably the one I am about to mention, modern movie theaters still have the shared armrest thing and it’s not like you can just pay extra for first class movie seats, no matter where you go, most theaters only have shared armrests and this is probably because they see movie going as a romantic experience and to make sure that at least a little touching is going to happen.

I remember the first time I sat in a movie theater next to a girl I liked, I was probably 12 or 13 and I swear to you that all of my concentration was spent on trying to get our arms or elbows to touch. Every little twitch registered in my brain as “was that intentional, or was that just her natural movement” only years later, did I learn women were thinking these same very thoughts.

As I got older, it went from elbow touching, to the more scandalous knee touching, like playing footsie without actually implying that it wanted to be played. I am talking about new relationships or one sided relationships here – the kind where you like the girl, but have no idea if she likes you back (based on all of my media brainwashing, it all comes down to kissing, if you like the girl you can tell in a kiss – I’ve never actually kissed a girl so I don’t really know, but based on my advanced movie theater knee touching you can really tell if you like the person from a nice warm knee brushing your knee)

So now you may understand why shidduch daters rarely go to the theater, besides, if you know the girl well enough to sit next to her with a shared armrest, don’t you think you should be married already? Obviously, due to the fact you are sharing armrests with an unmarried woman means you must not be doing it for tachlis purposes.

I wonder if this is a big reason behind the “does he/she go to movies” question such a big deal? Maybe an answer of no to that question means the guy is in fact very frum because he refrains from the putting himself in non-shomer negiah conducive situations. Of course, it is probably more likely that you touch an unmarried woman’s private parts at a Kiddush than at a movie theater, when squeezing past them to get to the tamtams before they run out.

29 comments for “The real reason why movies are assur”