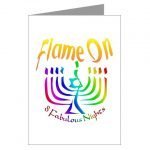 My friend calls up to tell me that I should have been a fly on the wall during an argument the other day between two fellows about whether or not lighting a menorah in a gay bar was a good idea.

The argument was between a yeshivish guy and a modern orthodox gay guy, the frummy took the classic route of – Chanukah was a holiday that we defeated the Greeks who were all about destroying the Jewish nation through public immorality and other things – while the gay dude took the route of “just because you’re gay doesn’t mean you can ignore the 612 other miztvos.”

I can understand both sides of the argument, apparently this same guy was deeply offended when someone asked him to light a menorah at a bar where there was mixed dancing (I told my friend that this is precisely the reason why chabad will always be kings of kiruv – because yeshivish kiruv artists would have said the same thing) and that doing a mitzvah in a “den of sin” is an evil thing – but is it? Shouldn’t we be trying to help those who want to be helped, wouldn’t lighting a menorah in a place like a gay bar show gay Jews that there are still mitzvos to keep despite the fact that they are sinning on a colossal scale, they are not lost souls and they are still Jews.

There are two sides to every story.

The other side is that this person doesn’t want to show support for people who are openly sinning, he doesn’t want to take God’s holy work and throw it into a place of tumah and that is also a good argument.

Although lighting a menorah in a bar is not so cool for the mere fact that you’re supposed to light it at your place of residence, unless you spend a lot of time in that particular bar.

← Dvar Torah Vayigash: Pretending
Do you wear your yarmulke in public? →

23 comments for “Would you light a menorah in a gay bar?”