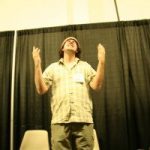 Because of its central Silicon Valley location, the shul in Palo Alto gets a lot of visitors, every once in a while I make it to shachris there and have noticed something really interesting. Almost all of these visitors do the Swaying Shuckel Stare. So you don’t know what the swaying shuckel stare is?

The swaying shuckel is when someone shuckels side to said rather than the traditional forward aft movement done by almost all shucklers. The swaying shuckel is usually combined with hand wringing, fist pumping and hand swinging, but of late I have also noticed the stare, this is done mostly by visitors who need to look around during shemona esrei to check out their surroundings.

The stare is a bit odd, because it’s as if they aren’t davening and merely shuckeling for an excuse to look around the room inconspicuously (you never be to clever around me, I sit in shul watching everything for something to write about) Swaying Shuckel Staring is never done by people who hold siddurim and it is almost always done by people with potential hocker abilities – probably because they always need to the scoop.

← God knew I would hate Far Rockaway
Do you enjoy Goyuerism? →

10 comments for “Do you do the shuckel stare?”