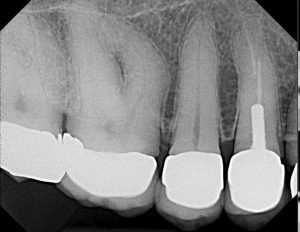 In apology for my somewhat lame Vayeshev Dvar Torah, I’d like to provide an explanation: I had been suddenly worried that my original post was too racy (get that) and at the last minute, I substituted a quickly- but perhaps poorly-devised replacement.  But I spent all Shabbos regretting the substitution, and so I’ll ask for your forbearance and post it now.  As a dentist the primarily Hasidic area of —shire,  I had this 18-year-old female patient 2 weeks ago for an exam and cleaning, and upon walking into the room in which she had already been seated, I found her coat lying oddly at the foot of the dental chair, serving to cover whatever amount of leg stuck out from her skirt.  I appreciated the move from her perspective — she was either concerned that this payos-bearing male dentist would have the unfortunate opportunity of glancing at her leg-shaped stockings, or she was concerned for her own modesty, in that lying somewhat helplessly supine before a heretofore unknown male gave her a sense of being exposed enough that covering her legs with her coat provided the extra security she felt she ought to have.

As I was viewing her x-ray films, I closed-out a screen, only to reveal the Yahoo.com homepage that had been there since logging off my email account — and right there on the Yahoo.com page was a fairly large advertisement featuring the upper half of a woman wearing nothing but a bra.  After having just been thinking about this patient’s innovative use of her coat to shield my eyes from her legs, it occurred to me that she may have never used the internet and might be thinking that the Yahoo.com main page I had up is an example of the very pornography that makes the internet prohibited.

Now, I’ve never thought about Yahoo.com in this way, but I suppose it’s because I grew up watching lots of movies and TV shows and have seen countless girls in bikinis throughout the years, albeit not in person.  So there I was with what I could feel were this girl’s eyes peering over my shoulder at the bra-lady on the screen and at me and my payos, wondering why she was bothering to cover her legs with her coat when I had this girl on the screen who could have benefited from a shirt, let alone a coat.

This past week’s Torah portion included some of the raciest parsha stories ever — we open with the mutual sin of Er and Onan, and close with the disparity in seductive success between Tamar and Mrs. Potiphar.  What are we to learn from this week’s odd foray into the otherwise strict prudence and overwhelming propriety of our Torah?

Judah and Joseph are both pursued, but their stalkers have opposing agenda; the Egyptian baroness sought only the physical, and while it’s perhaps difficult to focus with clarity on the motives of the slighted daughter-in-law — and I say that because claiming ‘religious dispensation’ doesn’t necessarily provide for objectively agreeable conduct from a secular perspective, I suppose no would complain if we describe Tamar’s actions as something other than an ‘urge to merge’ a la Curtis Sliwa.  With this, what are we to derive from these nearly titillating  accounts of intimate pursuit?

The Torah’s message can be seen as one of contrast: sexual intimacy is no different than any other physical pleasure in that it is inherently neutral.  So as in my personal example above, we can easily be fooled into thinking that sexual matters are bad because of how society portrays them — this is not to say that we should all be checking out Yahoo.com for kicks, but when we engage in internet use, we must remember that society’s perspective is not in line with the Torah’s.  Eating, drinking and, yes, sexuality, are mere manifestations of desire, and Judaism is telling us that our kavana, our intention, is what matters.  So take two people who eat a scrumptuous 3 course dinner at Abigael’s or two people engaging in passionate lovemaking — one can be glorifying God’s name while the other contributes to its desecration.  And this extends into other realsm of our spiritual existence, particularly prayer and devotion.  Two can be in identical straits and one receives what he senses is divine providence while the other does not, and we are told that it might be because one engaged in sincere communication with the Almighty while the other did not (RH 18a).

Motion is important, but emotion is critical.

← Skverer Rebbe’s estate auctioned off on eBay
Yeshiva Memories: NCSY stands for No One Can Save You →