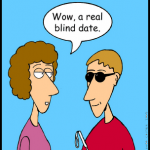 If you look at a graph showing the periods of which I used to go on dates for marriage purposes you will notice something very startling, almost every date I have ever been on took place in the winter months, many people tell me they date in the summer, it’s warm out and holding hands with that girl you’re into is a nice feeling when you’re walking around the city in a warm summer eve, I think exactly the opposite.

I usually date when I’m bored or lonely, I can remember many times surfing the frumster black hole because I was simply bored, the weather was poor, it got dark before I got home from work or I simply felt lonely, but I haven’t felt any of this as of late. I am grateful to have finally found a situation in which I am fully content, like life is finally making sense and coming together, but I catch myself because I know if it’s good now, it would be that much better with a life partner, but like most people who end up being older singles – I simply don’t feel like entering the fiery pit of hell we call dating.

I generally hate dating, it used to be interesting when I could write about it, but now that everyone knows who am I actually have to go on the date and refrain from writing about it, which means I have to be present on the date, which I means I have to put on nice clothing, put on deodorant and shave (not really considering the girls I go out with aren’t much into that, but I do it anyway) I have to actually make an impression and join the real world when dating and I really don’t like that, I hate putting my best foot forward crap, I hate refraining from my normal self which is anything but.

But I am starting to think along the lines of forcing myself to date so I don’t end up 40 and single (which doesn’t sound half bad to me, which may be part of my problem, being single is a lot of fun if you really take advantage of life and finding a girl who really wants to take advantage of it with you is hard) so I need to force myself to date, so where to start?

Frumster doesn’t really work and besides one of my favorite activities to do with Frumster and Jdate is find out who the people behind the profiles actually are – not really much a challenge considering most people use their profile name for other stuff like social networking sites and forums and bypassing the paying function. I haven’t played with Saw You At Sinai, but I’m thinking of it just to try it out.

I’m wondering if any of you have this issue of life being too fun to even think about dating, I think I dated most when I lived in Albany and that was because I was dirt poor and couldn’t afford to ski in the winter and life was a bit boring, I had 3 different steady girlfriends while I lived there and they were all during the winter, in fact, until 2 years ago I never went on a date or had a girlfriend in the summer or spring months.

← I love Oregon
If women are forbidden to learn what do they do in seminary? →