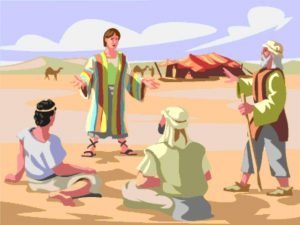 Don’t worry, I will not be drawing any parallels between this week’s parsha and Pride and Prejudice.

But I can’t help but thinking of Harry Potter when I look over what we’re shown of Joseph’s life.  He’s given lofty distinction from early on by a colored coat that is an obvious indicator of Jacob’s real feelings towards him as opposed to his other sons — it’s no secret that Rachel, his mother, was Jacob’s  intended wife, making Joseph equivalent to the intended first-born.  He championed the sons of the handmaidens (Genesis 37:2 + associated commentary of Rashi) when others did not.  He is berated by the other brothers for his audacity and one-upmanship and quickly becomes the underdog.  He’s incarcerated and sold, eventually placed in a position of unknown danger and what becomes of him?  He saves the day against all odds.  If I knew JK Rowling was going to make so much money with her Biblical Joseph knock-off, I would have done the same thing years ago!

We are told that Joseph makes this mysteriously grand leap from house-elf to Headmaster of Egypt as a result of such seemingly insignificant circumstances regarding a bunch of dreams and his superior polyglotism (Genesis 50:6 + associated commentary of Rashi) — we are given to understand that God had a plan to bring the Israelites into servitude in order to refine and elevate them upon their delivery, and that slavery was how God found it suitable to prepare his people for nationhood.  And Joseph was the first concrete step in the plan of this eventual nationhood, yet we may sit in amazement and wonder at how awful things appear for Jacob, Joseph and the brothers — and by extension, the entirety of our Jewish ancestry at the time — when we look at the unfolding story of deceit, despair and disruption.

But it was necessary to sink for us to eventually rise — and we are told that Joseph did not give up on the expectation that he would succeed in the end.  And that’s why he is called a tzaddik — a righteous individual.  Sure, his father, grandfather and great-grandfather were righteous, but they were not endowed with this moniker, because they were never in so desperate a situation facing such an unlikely happy ending.  So did Joseph never complain?  He might have, but we are told that his overall approach was one of acceptance of God’s plan, and he was key to ensuring the future of our nation.

45 comments for “Dvar Torah Vayeshev: Yosef HaTzaddik and the Half-Blood Goblet of Azkaban”