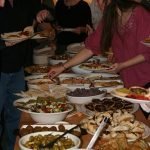 Once in a while I ask for post ideas on Facebook and someone actually has a good idea, rarely does this happen, it’s almost as if asking for ideas reinforces the belief that I actually have good ideas to write about because it seems most people can’t really come up with anything. So what’s the deal with kiddush hoverers?

This isn’t going to be a long post, it’s more of a public service announcement to tell the people who stand around a kiddush table without holding a plate or moving along need to get the heck out of the way. Kiddush is one of the most important Jewish events, it holds communities together and you just go on blabbing with your friend about her apple cobbler/kugel thing that she made last night, while everyone wonders why the people in front of the Italian dressing pasta salad are just standing around doing nothing.

Kiddush hoverers tend not to realize their crimes, that is why I’m taking my precious time to send this message to you bunch of spaced out fools. I’ve tried to push hoverers out of the way, but it always seems that they are stronger than me, holding their ground without even realizing. I don;t actually push them, but I do one of those shoulder taps to warning them that I am going to rudely squeeze between them with a plate of food that may get all over their shabbos clothing if they don;t shut up and start eating, moving along or getting out of the way.

There are other peaveful ways to combat the problem of kiddush hovering. One of the issues that one should notice is that hoverers don’t prepare for attack soon enough, so sometimes they are stuck in the middle of the table without anyway of getting a plate – I have overcome this by yelling across the room for whoever is closest to the plate stack to pass me a plate, but kiddush non-intentional kiddush hoverers are usually too nice, they just zone out and wonder later on where on earth all the luction kugel went.

So it’s high time for you tell your friendly, spaced out non-intention and well intentioned kiddush hoverers to move the heck out of the way or else you will fling the sephardic cholent on them (spehardic cholent is usually more watery and the chickpeas contained within it will fly farther and faster than oddly shaped potatoes or meat chunks – basically sephardic cholent is more threatening in the stain department.)

← Hilchos Christmas
Kollel guys on the hunt for jobs →

17 comments for “Are you a kiddush hoverer?”