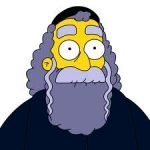 A long while back I almost wrote for Aish Hatorah’s website, don’t call me a sellout just yet, I’ll have you know that they pay quite well, I would make more in one article there than I would make here in one month of advertising. I remember being hooked up with someone who ran what they call Jewlarious on Aish.com’s website and having a look around and wondering if I was in the right place, but after fruitless attempts to extract an ounce of humor out of the site I came to the fateful conclusion that Jewlarious sucks!

The other night someone sent me a link to a video featured on their site, the video was about the black hole of greed, not one iota of funniness to it, it was interesting and I get the point, but it wasn’t funny. In fact the only thing funny about it was the fact that Aish stole the original video from You Tube which has 8 million views and pawned it off as their own, kind of weird considering honesty is one of those great pillars of Judaism – although it’s doubtful that kiruv would ever work if honesty were entered into the picture.

So I looked around Jewlarious and was seriously offended at what they call humor. Articles about humorists is not humor, videos about giving away your lottery winnings are not funny, a book review of Herman Wouk’s War and Remembrance had me scratching my head wondering if anyone who had ever seen Jewlarious could find anything funny on their site and the site has been around for some time so they had their chance. In fact I even googled “Jewlarious Sucks” to find out if I was just being pretentious and alone in my findings, but someone agrees with me and he was much harsher with them than I am going to be.

Found this gem of an article on Jewlicious titled Lenny Bruce is Spinning in his grave where the author goes on a very nicely written attack of Aish Hatorah (it’s a love and hate relationship for me – I have dear friends who have worked for and are connected to them, but the quotas and business models of kiruv I seriously disagree with) and then focuses in on how bad Jewlarious really is:

But let’s put aside for a moment their cultish modus operandi, or their drive to transform promising young Western Jews into destitute American or Israeli Charedim supporting large families with the tax shekel of the filthy chilonim. Believe it or not, a much more appalling desecration of the history, religion and culture of the Jews is being perpetrated by Aish ha-Torah.

That desecration has a name. And it is Jewlarious.

It’s hard to avoid that cringe-worthy portmanteau lately, as its ads have seemingly popped up on every single major Jewish website, including this one. Jewlarious, you see, is the newest arrow in Aish’s quiver of kiruv tactics – if you can’t reel in the kids with Shabbat dinners and subsidized tours of Israel, might as well try with that most Jewish of attributes, a sense of humor.

One of the things that reinforces my wavering belief in myself a Jewish humor writer is the fact that orthodox Jews don’t seem to have the ability to create funny pieces on a consistent basis. Mordy Ovitz of The Knish does a great job, but The Knish takes a long time to produce and the few funny guest posts I feature on my blog usually take those people a long time to come up with the material. Of course it’s quality over quantity and that’s why half of this blog is not necesarally funny, but when I get to sites like Jewlarious or the humor sections in those frummy advertising rags they give out for free in New York area pizza shops I want to puke and then keep mustering up the brain power to write funny shit to make up for all the crap that frummies can somehow call humor.

It’s hard to offer up curdlingly cynical Yiddish gems like, “If God lived on Earth, people would break his windows” when your organization is investing its energy in promoting the fiction that before the Jews arrived in the trayfeh medina, everybody lived a blissful existence of Charedi piety and child-raising in the Old Country (which is of course what God wants from us all).

I never expected Jewlarious to come up with humorous explanations for debunking the  hole the sheet sex myth, but I seriously couldn’t find one funny thing on the entire site and I have tried in vain multiple times, this is a years long venture and finally tonight I had enough. I felt the need to tell the world to tell Aish that their sense of humor is terrible, they could never hire someone like me and quite frankly I’m satisfied with my site (I rarely even think of writing articles for anyone else besides maybe  My Jewish Learning – Aish.com’s chief and much more interesting competition, The Forward, Esquire, The New Yorker or Tablet) I can have high aspirations can’t I.

I would probably be a kick ass kiruv artist, I would lure those unsuspecting secular Jews in with bawdy humor making fun of frummies and then convince them to let me kosher their kitchens and start keeping the laws of family purity. I could never convince them through philosophy, I would lure those college kids in with food, free trips to Israel and tales about how important it is for women to light shabbos candles (of course I would withhold the knowledge that this mitzvah is required of men too, because then these post-free trip to Israel or snorkel trip to Florida girls wouldn’t be so excited about lighting shabbos candles if it wasn’t a mitzvah to call their own.) and men to learn about oxen goring each other and falling into pits that may or may not be on public property, I would also fail to mention that women couldn’t learn gemara because only the men needed to know what Rav Kahuna said to wife when they made love.

53 comments for “Aish.com fails miserably with their Jewish humor site”