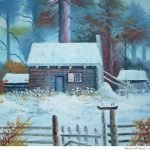 For the first time in ages I worked the day shift today and had an opportunity to join normal society, you see I work every night of the week besides Friday and Saturday nights until almost 11pm and never get to see what people do with themselves when they leave work. I love this schedule, but naturally it means I never do normal things, like browse bookshops, go to stores of any types or just sit around drinking tea and listening to Coltrane.

I’m walking in a strip plaza towards old navy, there are lights strung up the palm trees and I feel kind of chilly, actually I feel really chilly and I suddenly realize that the lights are for Christmas and it’s the middle of November, it literally just hit me in the face. Suddenly I noticed there were some people asking for holiday money and Rudolph the Red Nosed Reindeer was playing in the back round, it all seemed very surreal to me.

I never have time to join normal society, my dream has always been to somehow find a winter job that was during evenings so I didn’t have to get out of work and drive home in the dark having worked through the warmest and most thrilling hours of the day to be outside. Unlike most normal people, I get out of bed whenever up a cup of tea sit in front of the computer and decide where I am going to ride, hike or read a book on that particular day, it’s really amazing – unless you feel like socializing or going out on a weeknight – then I’m kind of screwed.

Then I went to Barnes and Nobles and read a book about Gastronomy and this place called Alinea which is a restaurant in Chicago that is doing very cool stuff. I sat in traffic for a little while and made phone calls – I have become somewhat of a hermit lately, not really a hermit, but I rarely turn on my phone and even rarer do I actually use it to make a non-work or shabbos meal related call. Some of my friends are cool with this, they know this part of me, but others I can tell are perturbed at my lack of communication, but this is how it will be for sometime before I really get used to enjoying life so much.

I seriously cannot believe it’s November already, soon it will be December, soon it will be one year since I have moved to California and it will go down as the most amazing and exciting year of my existence, I’m seriously having a ball, at work, wandering the mountains and so happy that for the first time in my life I feel settled – yes I just said that this wild man is starting to feel settled, I have never ever felt settled before, but in the past few months I feel that fate is taking over and I have been gliding along under this cloud of destiny.

Destiny is strange, who would have known that this puny little kid who couldn’t get out one word without stuttering for five minutes would get up on stage in front of 300 people and make them double over in laughter, that was part of my destiny and I am still building on that – having finally found something I truly enjoy that is actually making me a living, not a big living, but a living that includes the joy of going to a job every day that truly look forward to.

I’m feeling very warm at the moment, in fact I haven’t felt cozy since I’ve moved here and suddenly the feeling of the “coze” a rare feeling due to the lack of aged homes in Silicon Valley. I love old homes, the rustic feel of dark woods and creeking floor boards is almost non-existent here. San Francisco has this, but how often do I get to stay in an old Victorian in SF? But I have found the coze in my new house, a solid wooden table an urn full of hot water readily available for tea and potted greenery in the sun room to gaze at as I wonder what strangeness I should purge from my mind onto the paper or screen in this case.

So not only am I feeling settled, I’m suddenly feeling cozy, it’s a bit chilly outside, chilly enough for me to wear shoes instead of my favored sandals and I can see my breath if I look ever so carefully. It’s strange to have no recollection of real time, like I’ve been living in a dreamland and the Bay Area is kind of like this dreamland that the Lord had picked out for me sometime ago. I can live in the area yet before I can sick of the Jewish community I have to decide which of the multiple orthodox communities to spend shabbos in and don’t even get me started on the outdoors opportunities of the area, it’s pretty insane when all is said and done and I haven’t even been to half of the parks, open preserves and trails within 40 minutes of my house.

For many reasons until this evening I was stuck permanently in late September time, the evenings were cool, but I was still able to hop on my bike after work for a quick ride and wear shorts and sandals, unlike my co-workers who favor the bottle for after work stress relievers I prefer heart pumping grueling rides, which are usually the second rides of the day having usually ridden in the woods before work. I actually did ride around after work tonight, but I actually wore a long sleeved shirt. During my ride I sat on a bench and watched commuters switching trains in downtown Mountain View watching the regular folks who work the rat race, walk with drooped faces looking forward to another night in front of the TV or computer screen – if I worked all day at a computer – I have no idea how I could go home and sit again in front of it. It felt comforting to just watch the normal people; I haven’t really been out or work at 5pm in ages. I haven’t worked a day shift since the clocks changed so my only knowledge as to the clocks changing has been because I have to skip out work to daven mincha behind a dumpster at an earlier and earlier time every day.

Unlike many people who talk about the weather because don’t like awkward silences, my life revolves around the weather, so these summer days in November have really been getting to me. It was 75-80 degrees and cloudless every day this week and since I don’t go to work at a normal time I have been stuck in that pre-fall season when the mornings are cool, the evenings are pleasant and my stomach has been flatter than ever at this time of year. Normally I start gaining weight and getting out of shape starting in late October, I ride and hike less, but suddenly I find myself in late November riding my bike every day of the week and riding hard and not forcing myself to, just picking up one of my three bikes and going for a ride through the mountains, on the trails or just around the Stanford Campus jumping off of ledges and riding on logs.

Like most East Coasters I have always thought I couldn’t get used to this two season thing, we have spring and fall here, there doesn’t seem to be true summer and there most definitely is not a winter, I can drive a few hours for winter, but it’s nothing like the east, there is no miserable weather, unless you live on the coast.

← Traif Is Going Out of Style
Devar Torah Vayishlach: Free Will and Divine Intervention →

7 comments for “So I just realized it’s November”