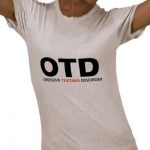 PREVENTING OTD (OFF THE DERECH) IS A MEDIA JOB

My dear friend Stephen Colbert (the “rival” of Jon Stewart, for those who can’t stay up past 11:30 p.m.) usually has his annual “ATONE-a-PHONE” shtick just before Yom Kippur. Some whacko Jew calls his Magen-David-laden phone to say sorry for something he’s done during the past year; this usually makes Yom Kippur come across as silly and funny, but it makes Judaism look really COOL!

On another night, however, Colbert –whose writers are mainly Jewish if you go by their names– showed footage of a bunch of black-hat, beard-yielding yids arrested for pawning organs in the underground market, and suddenly Jews didn’t look so cool.

If you believe that all things come from Hashem, then so does the camera, the production crew, and the television set, and despite those individuals who insist on lowering our image to the rest of the world, the Almighty wants us Jews to create a positive PR movement for ourselves. Therefore, it is our duty –whether we are learned and wordly  Ba’al Teshuvas graduating from Ivy League universities, or quietly unassuming FFB’s graduating from the Yeshivas– to spawn the latest in Jew-friendly commercials, ads, books, magazines, computer games and websites where anything Jewish might stand out.

On the same note, many secular Jews of the past 50 years who have grown up watching Cecile B. DeMille’s The Ten Commandments or Dreamwork’s The Prince of Egypt are full of pride in their heritage, despite never having come so far as two inches to a Torah scroll. Keeping the laws of shabbos or separating milk and meat are beyond what a secular Jew can even fathom. What is memorable to a non-affiliated Jew are the cinematic heroics of Moses fighting against the oppression of his enslaved brothers and his boy-to-man journey of growth and maturity. Moses as movie star is likable and more real than a black and white sketch in a dusty old chumash!

Now, of course in the Frum community, we have many role models to look up to, and indeed, the humbler they are, the better they are as role models, but oftentimes, they’re missing that “likability” factor, or what I like to call “with-it-ness”. You can be the wisest of scholars, but if you don’t know what your congregation knows, then how can you be a connecting tool between your followers and the Torah?

This is why demanding your community to ignore or avoid all forms of media (which I think is becoming more difficult unless you live in a shtetl that has no electricity within a 50 square-mile vicinity!)  Even my rabbi knows what baseball games are happening, what CNN is saying about the latest security threats, and what the internet is saying about the latest “K’llel Hashem” Jew.  His drashes have that much more meaning when he encourages us, his audience, to relate our current world to the Torah.

Indeed, the FFB community continues to make enemies of some of our media moguls…But just like Jon Stewart and Jerry Seinfeld and Mordecai Richler make intermarriage look cool, we should have movies and documentaries –posted on Youtube if funding is a problem– about two Jewish people who make it work the old fashion way, with family purity laws and keeping shabbos. It really can be romantic!!.

Just like McDonald’s and KFC have the hold on fast food marketing and advertising, there should be a Kosher burger and chicken place (is there an echo out there?) doing the same. Yes, this all takes funding, but there are so many creative Jews with access to the media that can totally use it to the advantage of the Jewish people. So if your Rabbi refuses to have a “movie” night along with his Torah talk, I’m not sure how you’ll get all those unaffiliated Jews to go to his Malave Malka lecture over the club downtown.

Hannah and Peninah: A Musical Interpretation

← You know I dated the Sternberg Hot Dog Story girls friend?
Traif Is Going Out of Style →

47 comments for “Preventing OTD is the medias job”