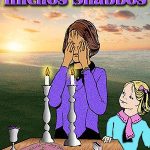 One of the ills affecting the Jewish community of the Bay Area is lengthy meals. I am sure this exists elsewhere, but never have seen it get so out of hand and I have felt that it’s high time for things to change.

In general the hachnasas orchim is amazing here. There aren’t too many single folks in most of the shuls and in general someone will invite you out. I like to prepare ahead so I don’t get stuck at one of these insanely long meals, but I have had the misfortune of sitting at a Shabbos lunch and being stunned when the host said “looks like it’s time for mincha” after I started wondering what time it was and when the meal would finally end.

On the east coast the problem is generally with people who say they are going to bentch, sing shir hamalos and then sit with their bentchers open as a new discussion is brought up and we all wonder (except those in the discussion) when on earth we are going to use our open bentchers.

I’m getting a bit ahead of myself. In general, the Shabbos meals in the Bay Area are lengthy. It seems that these crazy liberals haven’t been taught the minhag of the Shabbos shluff. In fact, I can’t really remember the last time I had the opportunity to take a Shabbos shluff because in general the average Bay Area Shabbos meal goes for 3 or 4 hours. Insane, right? Now don’t get me wrong, I’m a social guy. I’m on this plan of being more social – having realized my life revolved around work, riding my bike as much as possible and blogging, I have decided to try and be more social. This means going to social meals and events, which I normally shun for the life of a introverted loner outdoors nut, so I may have myself to blame.

I have been to several meals that were punctuated by awkward silences, so I thought it made sense to keep the conversation going — at which I am very skilled. Not only do I know a lot about random stuff, I’m kind of like Eisav. I can ask bland halachic questions so we are not considered a table of bitul torah scorners, but there is a time when every host should say – ok I think we’ve spent 3 hours on the salad course.

While I am on the topic, Bay Arean (Pronounced Aryan – not sure if there is even a term called Bay Areans, but that’s what I call them) Jews should be able to move their courses along better. They seem to be really good at making a swift Kiddush, getting hamotzi over with and getting some food on the table, but some people take way too long to go from soup to main, like hours long.

Now it just so happens that I wind up at a lot of kiruv indoctrination tables run by the JSN. It’s hard work to convince a bunch of secular mid twenties Jews to pre-game at your house on Friday night, so you might as well hold them there as long as possible so they can see the warmth and suck in the beauty of the Shabbos candles (I have no idea why girls who become frum find such beauty in the shabbos candles, but they do – maybe because it’s easy and the men don’t do it – I guess kiruv professionals fail to mention that men are chayiv in the mitzvah of shabbos candles too and the only way to get out of this is to pay your host to light for you) So I guess the meals have to drag on because “we only have one shot at serving this one the Kool-Aid before she marries a non-Jew.”

What I’m really talking about is the non-Kiruv people, the regular shmoes who feel the need to hold you there. It just so happens to be that I don’t wear a watch, but I’ve been feeling like doing the whole “skip out early I need to nap” thing. Is that cool? I have manners – it’s more shocking to me than you – so can I just say “look folks, it’s so late that the cholent is growing mold already — do you mind making the mezumin early?” Or is that too bold, or will they wrap up the meal grateful to me for saying something? Or will they go through the process of bentching, but end up sitting around for 30 minutes with their bentchers open discussing the latest Kosher By Design for kids book?

← Living in a singles community doesn’t help you get married
You know I dated the Sternberg Hot Dog Story girls friend? →