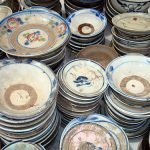 Do you stack or scrape?

I know it sounds weird, but apparently this is one of those random questions that frummies in the shidduch world ask.  I have never been asked if I care about this particular way in which my future wife will clear the table, assuming she will clear the table in the first place. Furthermore, I have never even met someone who was asked this question by a shadchan, all of which leads me to believe that it’s one of the urban legend shidduch questions, kind of like the one about whether the yeshiva guy has laces or slip on shoes.

Let me explain to you why stacking and scraping became such an important issue on deciding if the girl would be a good wife for you. There is a difference of opinion on the issue, but many gedolim hold that if the girl stacks her plates she is in a rush to do the dishes and will be careless, spots will be left on the dishes and future guests may wonder about her abilities in the home. Other people also felt that stacking the dishes was merely a way to leave them off to the side and dishes that were stacked tended to be left alone while the dishes became crusty, on both sides of them no less.

Others argued that scraping dishes took time away from torah study, but most of these people were modern orthodox because women are not over the issur of bittul torah, since it is assur for them to learn real torah (they can learn nuvi, but only the tznius parts, which limits their options to just about nothing)

According to most mainstream shadchanim, scraping is the way to tell if your wife will be able to provide you with the shalom bayis you need. Many shadchanim will only help scrapers find a shidduch, while many stackers grow old and move to the upper west side where they become modern orthodox and begin to use paper plates (a shonda) Scrapers have it so good, because they take the time to clear the plates and they leave the table so that other men can talk torah without the women folk present.

In recent years it has become common for boys to pretend to offer their help by getting up half way from their seats (kind of like the half assed moddim bows in shul that people do) but it doesn’t go much beyond that. Men in the yeshivish community are encouraged to stay out of the kitchen unless they are making stuff in the microwave, crock pot or George Foreman Grill.

31 comments for “So what’s the deal with stacking or scraping?”