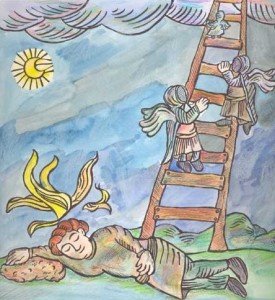 I can’t seem to arrive at Parshas Vayeitzei and read about Jacob’s angelic ladder dream without recalling R’ Mordechai Becher’s rendition of something he heard from R’ Isaac Bernstein.  So here it is — it inspires me every time I hear it:

There is a well known custom to recite the verse “Baruch shem k’vod malchuso l’olam va’ed” (Blessed be the Name of the Glory of his Kingdom forever) after the first verse of the Shema prayer, even though it does not show up in the text of Deuteronomy 6 — and so although we insert it between verses 4 and 5, we do so quietly.  Various explanations are given as to why this is so– either that Jacob responded with this verse to his sons or Jacob received such an insertion from angels — but either way, because it does not show up in Moses’ Deuteronomical text, we whisper it.

Just as we do lots of weird and wacky things on Yom Kippur that help to signify that it’s a day unto its own, we also recite this verse aloud  — and the general explanation given is that Yom Kippur is a day of return, a day of reversal and a day of self-reflection.  We atone for our sins and expect to come before God as pure and holy as an angel — whatever that means, suffice it to say that angels don’t sin and we would like to conjure up that image of ourselves.  So we permit ourselves to say this verse of Baruch shem aloud.

Asks R’ Bernstein: when do we say this verse out loud?  Well, depending on the cantorial prolixity of the individual leading the services, we usually get to this verse no later than 45 minutes after the start of Yom Kippur — we are still fresh from our shower and shave, we are still showing off our newly-polished atarah and many couldn’t eat a drop  food even if we wanted to — not very angelic.

Immediately after Yom Kippur is over, however, we jump into ma’ariv and when we get to the Shema, we whisper Baruch shem, even though we haven’t eaten, washed or had too much time to sin at all in just about 25 hours!  So, asks R’ Bernstein, the circumstances should be reversed — we should boldly assert our angelic nature at the first ma’ariv after Yom Kippur with a public and raucous declaration of Baruch shem, not at the ma’ariv before we even begin.

R’ Bernstein then draws a parallel to Jacob’s dream to explain the seeming contradiction.  As we all know, Jacob sees angels on a ladder — olim v’yordim bo, “ascending and descending upon it.” (Genesis 28:12)  Where do angels come from — certainly not Earth!  So why are angels first ascending and then descending; it should be reversed!

Rashi, the foremost biblical commentator, comes to the rescue with an explanation that these were Jacob’s guardian angels — his posse of divine protection, so to speak.  And as he was leaving the holy Land of Israel, there was a changing of the guard from the more elevated type of celestial agent to a perhaps inferior, more common type of angel.

But Jacob was in Beit-El — which despite the most determined efforts of the United Nations, is not a border city (R’ Becher’s joke, not mine) — so why are the angels making a switcheroo now?

The Maharal answers that even though Jacob was still well within the borders of the Land of Israel, he was on the way out, and what matters most is not where we are, but where we’re going.  So since Jacob’s mind is on leaving Israel, it’s like he’s already gone and his angels need to rotate position.

Similarly, explains R’ Isaac Bernstein, even though we begin ma’ariv of Yom Kippur with our stomachs full and our hearts heavy, our minds are headed for atonement — we are seeking to re-establish our ailing relationship with The One, The Only, The Almighty Master of the Universe.  But when Yom Kippur is over and we begin our first ma’ariv of what we expect to be our new lease on life, what’s on our mind?  That we had better not be blocked in the parking lot and that the bagels had better be defrosted — or else!  Yeah…not very angelic, and so we recite Baruch shem quietly once again.

Perhaps we may use this as a thought-provoking insight into making a distinction between who we are and where we’re headed — because according to the Maharal, it sure seems like the latter is way more important than the former.

← Guy quits his conversion but still hangs out with frummies
So what’s the deal with stacking or scraping? →