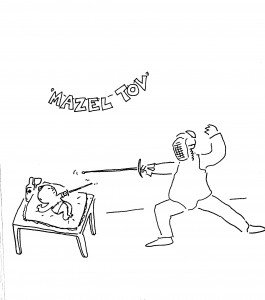 I always figured they through them away, or maybe put them in shamos – after all – it is part of a treaty between the baby and God right? That would make it a holy item right? But what would all the non-Jews do with this valuable piece of dead baby skin? Would they do anything with it? It’s not like I do anything with all of my random skin that falls off due to bike accidents, poison oak scratching and cutting myself when I’m in a particular teenage angst kind of mood, I merely throw it away, or leave it stuck to the tree I ran into on my bike.

So my dear friend Gila (whom I don;t actually know, but sends me lots of goodies over facebook) found this article about the random usages of foreskins used for. Did you know foreskins can be used for skin grafting, in high-end skin creams and cruelty-free cosmetic testing? I wonder if the ADL ever had trouble with the fact that a Jewish inspired surgery was being used to support the skin cream market – it sounds to Hitler-esque to me.

Does this mean that if the mohel throws the foreskin away that he is over the issur of baal tashlich (wasting)?

Now that we’re on the subject I was thinking of other usages for foreskins, Jewish usages, like mouthpieces for the shofar or maybe some sort of parchment for an environmentally friendly torah – but in the end I am at a loss, my mind is going blank and I’ll leave it as an informative article – although based on the fact that human meat is parve, we could make a gourmet parve meat sandwich – but I don’t know anyone who’d be willing to eat a foreskin sandwich – do you?