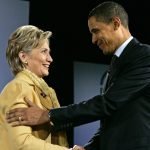 So some Rabbi last week in Israel ruled that you can shake a woman’s hand for business purposes or so you shouldn’t embarrass her and what do you think happened, a bunch of rabbis came out against this guy and basically called him an idiot. We can debate the laws of negiah until moshiach comes, but I always thought the hand shaking thing was over with – you have those that shake and those that don’t (you can even bring that over to post urination practices, I’m not much of a shaker myself)

What absolutely cracks me up is that this Rabbi Avner guy comes along and says that shaking a woman’s hand falls under one of those sins that it’s better to die than transgress and that’s the point at which the music stopped. I have been told by many older folks that the Rabbis today “don’t know crap” and that they come up with stricter and stricter rulings, because it’s easier to ban than to give leniency and that’s true. Saying something is not allowed is way easier than whipping out a Mishna Brura or Shulchan Aruch (when’s the last time you saw someone learning halacha in shul? I don’t count learning random English translations as real learning of halacha – I can do that myself) But to say shaking a woman’s hand is so bad you should die over it, is a bit much, don;t you think?

Obviously it sounds noble, my rabbi is so frum he says shaking a woman’s hand is worse than incestuous-gay sex, wo your rabbis so frum!!!

But let’s just say for a minute that shaking a woman’s hand was really something that you had to die over, would that mean that you couldn’t help an old lady up who had just fallen in the middle of the street, or is it ok since she hasn;t really been a niddah in 30 years?

Obviously if a woman was drowning it would be assur to save her, first of all, she is probably not dressed tznius, second of all if shaking her hand is a sin, imagine the hell you’re gonne get for grasping her hand to help her up when you drive out on your jet ski to get her.

I did think of one heter. If there is a naked woman drowning in a body of water that would, according to your expert halachic calculations count as a suitable mikvah, you could save her.