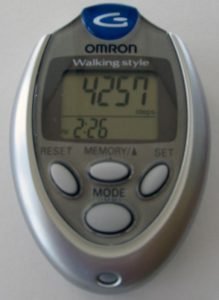 I was in line at the bakery some time ago behind an exceedingly wide individual, and upon his belt, which served as the horizontal height of curvature of his enormous girth, was clipped a small electronic device.  Figuring there’s no way this guy is on Hatzolah, I asked him what it was, to which he responded that his doctor kindly threatened to kick him out of the practice unless he starts wearing a pedometer and complying with his orders.

This guy continued to tell me that he takes less than 2,000 steps a day, even though the average American male of his age takes about 4,000 steps — doctor’s orders were for him to double his steps per day and he had a month or so to get going.

So I did a little research into pedometers, and it seems as though the data is pretty sketchy — but it appears as though even 4,000 steps a day is too few for a healthy adult male.  In doing my cursory research, I found that Japanese adults take about 10K steps a day!  And even though the sketchy data supports that 10,000 steps is a bit much, 4K steps a day does seem way under ideal, even if it is average.

Assuming one recognizes himself or herself below average, it’s true that we need to get to average before we can get to ideal.  Ideal may seem too far away, too unrealistic.  So maybe average is a good direction for the below-average, but it shouldn’t be the proposed destination.

Haeckel might have endorsed the view that “ontogeny recapitulates phylogeny,” but it was Rabbi Judah Loew, the Maharal, who promoted that “physicality recapitulates spirituality.”  He said that everything we see in the physical world emanates from a similar, and perhaps equivalent, spiritual origin; the physical world is but a magnified and more revealed form of the spiritual world that lies deep to it.

Many may feel spiritually removed and recognize the benefit of bringing themselves up.   Who doesn’t desire sometimes to raise themselves to a level of greater devotion and more enthusiastic worship?  But what is the goal…to meet the mean?  The median?  Or perhaps the mode?  Shouldn’t we be shooting for ideal instead of average?

In this weeks Torah portion, we are introduced to Jacob and Esau (Genesis 25:27).  Right from the start, it reads like a telling novel of good vs. evil, in which the good appears really good and the evil, well, really evil.  Isaac’s twin sons are painted in such a way as to make it as though they each epitomized the full glory of their respective paths in life.  If nothing else, perhaps such examples can be taken to establish benchmarks of objective ideals — what does the Torah want us to learn from its description of Jacob other than suggesting we use it as a template for our service to God and humanity?

In today’s times, I’ll leave the ideal to someone else to define — but suffice it to say that there can be at least a subjective ideal, if not an objective one, and how many people permit themselves to fall among the masses, trying to do no better than the guy next to them?  And I’m not talking about taking a holier-than-thou approach to your neighbor in the synagogue — I’m talking about people who say to themselves, “Eh, it’s good enough for him, so it’s good enough for me.”

I remember being in the synagogue on a Jewish holiday and the close descendant of an esteemed, well-regarded rabbi was sitting a row behind me.  He was sitting there with his tallis dragging on the floor, too busy to notice because he was talking with the guy next to him.  Now I don’t talk when prayers are going on, because my father doesn’t talk when the prayers are going on and that’s always been important to me ever since I was a little boy sitting next to my father.  But seeing this rabbi’s grandson chatting away really ticked me off, because I could sense that other people regarded him as a model Jew — “if he slouches, I can slouch.  If he talks, I can talk.”

Yesterday was the 29th anniversary of my birth, and because I usually can’t wait for the High Holidays to come to rethink who I am, what I’m doing with my life and where I’d like to take it, I take other yearly milestones and try to imbue them with some meaning — almost like a spiritual beacon, after which I’d like to be a better, more refined individual.  And I’d rather not fall into the trap of trying to get my spiritual pedometer to just match that of the average person — because perfection is a direction, not a destination.