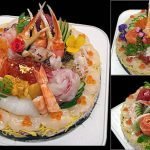 Kiddush can be a violent place, this is mostly because frum Jews have a minhag to forgo breakfast on Saturday mornings due to halachos about eating before davening and the general thought that milk and cereal is not shabbosdicke, but also because most normal Jews want to be on time to shul. This and the fact that many shuls that have gala kiddushim tend to take a while to finish up shabbos shachris can create a potentially violent affair.

Violence is one of the reason I like kiddush so much, the fight for the cholent spoon, the debate whether to eat the fish or straight for the cholent, the general lack of derech eretz that prevails at most New York kiddushim and the lack of manners – is very entertaining for myself and I’m sure others.

Enter sushi into the mix and you really have anarchy on your hands. For one reason or another frum people love sushi, it’s hard to go into a pizza store, deli, Italian restaurant or steakhouse without being assaulted by a sushi counter. I say assaulted, because I firmly believe that restaurants should stick to their own variety of food, I refuse to eat in a deli which sells sushi, it bothers me immensely. Pizza is a bit different, because they have established themselves as the “we sell whatever makes money” kind of places, but still this is really only an east coast thing, LA doesn’t do that sort of thing.

Anyway, the only thing that makes Jews more violent than a gala kiddush, the new term that has been overused in the last few years to describe a hot kiddush, I think gala kiddush should be reserved for really good kiddushim, yet I would compare it to the term “continental breakfast” which conjures up the imagination of travelers sitting down to a breakfast of bacon and eggs, while they are treated in the morning to instant coffee and Sara Lee perpetually stale preservative laden muffins. In recent years shuls have begun calling any kiddush containing hot foods gala, this is false advertising because a potato kugel can hardly be classified as gala.

I have been to several sushi kiddushim in my day, they are rare, either being held to attract new members or just because they can afford the expense. You can forget any modicum or derech eretz and the laws of shomer negiah are simply disregarded, I have seen people elbow, push and pull to get in and once they are there, they pile their plates while eating at the same time, I think the only other food that can evoke such violence is the handing out of lekach by chassidic rebbes, but even that is expected and everybody usually gets some.

← Are you a coffee snob?
If you saw someone being harassed, would you intervene? →

35 comments for “Want to see violence? Go to a sushi kiddush!”