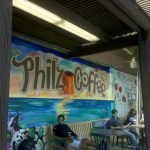 On the east coast we call them coffee snobs, those people that think Starbucks is purposefully burnt so people will flavor their coffee with vanilla and hazelnut syrups that are just sugar and chemicals, those people who make fun of folks that like 7-11 and Dunkin Donuts coffee, those folks who lug french presses around, need 14 bar pressure on their espresso machines and scoff at anyone who dare say they like instant coffee, but alas I have become a coffee snob.

However, in the west, specifically the Northwest which starts in San Francisco, this is not seen as snobbish, it’s seen as normal. One of the ways in which I tried to explain the difference between the Bay Area and New York was to describe how people enjoyed food, wine and beauty more than they enjoyed large houses, luxury cars and fancy clothing. I tried explain that it wasn’t out of the ordinary for someone to call me up erev shabbos and tell me that they were having pasta with red sauce so I should bring red – that had never happened to me while living on the east coast. I would be told to bring a suit, otherwise people in shul may look at me funny, but never would I be told to bring a Riesling over a Cab.

I was thinking about coffee snobbery today as I ordered my custom cup of coffee at Philz Coffee in Palo Alto, I found Philz this past Saturday night on Yelp, as I was searching for a good coffee house in San Francisco to do some writing in. I noticed Philz because it had almost 800 reviews and all of them were 5 stars, I ended up at Ritual Roasters instead, based on the recommendations of a friend and ended up at Philz on Sunday.

Philz is coffee heaven, if there was an opposite to Starbucks this is it. Instead of the assembly line coffee house that is overrun by women ordering drinks with high fructose corn syrup and low fat whip cream, Philz doesn’t even have a table for sugar or cream. Each time you order a cup of coffee, they grind the beans specifically for your cup, so besides for the freshness, you are constantly greeted by the almost orgasmic smell of freshly ground coffee. They don’t have a cream and sugar table, because they make each cup custom, it takes a bit longer than traditional coffee shops, but it’s well worth the wait – it works here because no one is ever in a rush anywhere and people have patience.

I really didn’t appreciate good coffee before I came here, as any other writer does, I frequented quint little coffee shops all over the place. I really liked Ozzies in Park Slope, the Muddy Cup in Albany and Spot Coffee in Rochester, but I have always been an espresso guy, preferring lattes to cappuccinos and rarely drinking coffee because most places have it constantly brewing, while espresso is usually fresher. Once in a while I would order a chai latte only to cancel the order if they poured the “chai” from a carton – 95% of coffee shops do not serve real fresh chai. Here at Philz it’s black tea with cardomom and a bunch of other Indian spices, I like how one reviewer on Yelp didn’t like the fact her chai had sediment, perhaps she is used to corporate assembly line chai which is merely an ice tea mix with milk.

← Legalizing marijuana will cause car accidents
Want to see violence? Go to a sushi kiddush! →

40 comments for “Are you a coffee snob?”