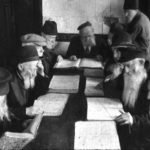 I have proof that the frum Jews of yore were smarter than they are today, of course my proof is faulty, because things were different back then. Back then, there was no internet or secular society to pollute the minds of young people, to beckon them to go off the derech, to tell them to do what they wanted. All they had was talmud, walks in the Russian forests where they met the ghosts of Chassidic rebbes and the prospect of taking over their fathers shoe cobbler business.

So what happened then that allowed me to believe that as a whole the frum Jews were smarter than they are today? Was it the little known fact that every single kid religious or not knew the entire Talmud with all its commentaries by heart by the age of 14 and in order to be considered the Illui of some town you had to know all of shas and the commentaries and kaballah by the age of 8, but in order to really qualify your father had to be dirt poor and your mother had to be an eishes chayil (definition: never left the kitchen, even though all they had were potato peels because they trust the local butcher and time spent in the kitchen with just potato peels remember they didn’t have mishpacha magazine, binah or Z’manback then – was quite boring)

Was it that the yeshivas were filled with tons of these illui’s that they had to constantly open new one’s and that everyone was so poor but still sent their kids to yeshivas and every shoe cobbler, tailor and carpenter knew all of shas and regularly communicated with the Kotzker Rebbe while they traveled through the pale to inns to tell the rebbe that the cosacks were coming to arrest him – but don’t worry – we won’t say tachnun on that day.

Nope, none of these reasons are why I think orthodox Jewry has taken a plunge out of heaven to the fiery pits of rampant porn downloads, illegal daf yomi shurim on their heretical smart phones, the smuggling in of internet to the home for “business” purposes, women wanting to leave the kitchen and lain at the kotel, men wanting to earn a living and eat more than potato peels, children wanting to fasten their kipot to their heads because of the global warming induced wind storms that wreak havoc on frum communities of which has been blamed on the acceptance of gays by a society which isn’t far from accepting the marriage of humans and their domestic pets.

The elders believe that like “global warming” Judaism is a natural cycle, a downward trend that started right after the grass and flowers died on Mt. Sinai. After all, we are farther from the mesorah, so we don’t know as much and we cannot rely on the firsthand experience of our grandparents who remember exactly what Moses was wearing when he came down from the Mountain and saw everyone tripping on the wild mushrooms that God had planted there, there is a theory that Moshe Rabeinu himself was tripping when he dreamed up the golden calf orgy thing and the only reason the women didn’t take part in it was because the mechitzah was too high. They were that frum!

My proof is in the tayvas, the desires were for knowledge which the shtetl didn’t supply. Every book about the shtetl I read is about how the evil Maskilim tried to steal away the learned buchrim by providing knowledge of the outside world, but it wasn’t frivolous knowledge, it was art and literature and philosophy and psychology. It just so happens to be that I know a lot of folks who are lured off the derech for those very things, but it’s not the majority. Is it possible that we are just dumber than they used to be, or that the lure of Television is much higher than that of a book.

Sure society has degenerated to the point where people don’t understand the beauty of getting a hand written letter in the mail, finding a tattered first edition book with an inscription dated 1868 inside the back cover or watching a concert without writing tweets about it, but people are still searching for knowledge aren’t they?

It just seems that the folks going off the derech are getting dumber, it’s my opinion of course and it’s faulty I admit it. It just seems that back in the day, they went off the derech after actually learning everything and figuring out that it didn’t make sense intellectually and it doesn’t – but I enjoy being religious so I carry on with rolling out of bed at ungodly hours to don leather straps on my head that may look like some sort of early BDSM thing to outsiders, especially if they show up during a chabad erev yom kippur malkus session.

So were frum Jews of the shtetl smarter than today’s?

Or am I just comparing pears to quinces?

← Permission to Deny: Part #2
Legalizing marijuana will cause car accidents →