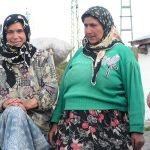 I started to read this in the shul bulletin and sighed. We have many very spiritual folks in our shul, and one single young lady — a very special girl, with great talent in fabric arts, sheitel making, and I’m told she has a great voice too. But she’s not very attractive. You could say she has a face for radio. She has probably never seen a mascara brush, and I’d guess that she has to get her clothes at the kinds of places that old babushka ladies from the Ukraine go. And she’s nearly 30 years old — and unmarried.

The problem has reached the point of crisis. It did not help much that her parents named her Genendel after Genendel the pious. And despite the Shadchen calling her demure, she’s downright anti-social. On the rare occasion she speaks, she only mutters incoherent quotes from Shefa Tal, Zohar, or Slominer Rebbe about love and sparks of holiness. Many of us don’t see her getting married so soon.

And that’s where the sisterhood comes in to play. They are getting 40 women to bake challot so that they can all “take challah” and make 40 brochos in honor of Genendel. They they are going to serve snacks so that they can say another 60 brochos together. The whole thing is some segulah ritual to bring about a husband. But I think they got it all wrong.

First off all, imagine the amount of Loshon Hara that will be generated by getting 40 women — nay 40 frum women — together to talk about shidduchim. How will G-d react to this event? On the one hand He will be forced to comply with the wishes of the sisterhood and find a shidduch for Genendel — these Kabalistic rituals are pretty powerful and G-d had better take note of what’s in store for Him. But if He is able to count each instance of Lashon Hara against each brocha, then He might have a way out. Leaving Genendel husband-less, but with 40 more challot to eat.

Now, that’s the other part of the problem folks! If the sisterhood got together and each of the 40 women donated $36, they’d have enough to buy Genendel a high-quality stair-master. And that would probably be a lot more helpful than all that food she does not need to eat.

Rebbizen Isha K. Tazriah tells me that according to her husband (a known mekubal and excellent bridge player), the challot will not contribute any additional weight gain since the women will be whispering special tehilim as they knead the dough that causes the challah to act like Olestra and not get absorbed by the body.

Yah, that should really help Genendel out.