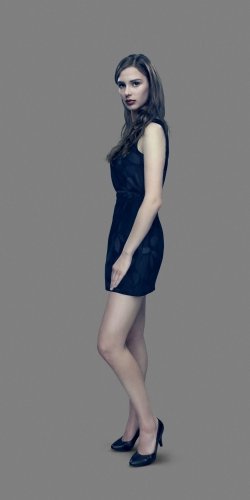 Tablet Magazine reports that there is a Modern Orthodox girl named Esther Petrack from Massachusetts on America’s Next Top Model with Tyra Banks.

It’s always cool to see a fellow member of the tribe on TV show, even a reality show. It is more than a little counter-intuitive to see a Jewish girl competing for a modeling contract when you consider the tradition of tznius (something akin to modesty) that has been a hallmark of observant Judaism. In fact it probably breaches most tznius standards to just participate in a reality show, but certainly a show that celebrates the barely clothed human body.

Yet, I was still wondering (hoping?) that somehow Esther would follow the lead of her biblical namesake (Queen Esther of Purim fame) and somehow make a kiddush Hashem (glorification of Godliness) on the show (ed: it turns out in some ways she did).

After letting Esther say a bit about herself—namely, that she was born in Jerusalem—[Tyra] asked her about her Orthodox Jewish practice. “Do you honor the Sabbath?”

“Yes I do,” Esther responded, proceeding to explain the rules regarding the usage of electricity, computers, cell phones, and cars on Friday night and Saturday. Tyra sternly informed her that ANTM contestants work all the time, seven days a week. … Would Esther, Tyra wanted to know, be able to adhere to the ANTM work schedule? Her Jewish identity was all of a sudden squarely on the spot…

…She replied after a momentary hesitation: “Yes, I would do it.”

There is a good chance that this was edited to sound worse than it actually was live. I really hope that is the case. (ed: it turns out it was the case) However, the feelings I experienced READING the transcript are colored by the way CW depicted the conversation. My main point is not relevant to whether Esther is a Shomer Shabbos or not. I hope she still is…

I know many non-observant Jews. I know many Jews who “honored the Sabbath” at some time in their life and no longer “honor the Sabbath”. This is different. Not because she is on TV or seeking a career in modeling. It’s different because the world saw the moment that she made the decision. We were witnesses to the “moment”. One minute she was Observant and the next moment she was not.

To me, that is a very dramatic moment.

We all have those kinds of moments in our life. That moment of choice. We are told “Choose Life”.

Tablet Magazine’s Dvora Meyers then goes on to write that this is another harsh blow to Modern Orthodoxy. On that point I disagree. Every sect and stream of Judaism has those who stay on that path, others move to more traditional practice and others to less practice. It is not a “problem” unique to Modern Orthodoxy.

Also, don’t think for a second that the story of Esther Petrack’s connection with her Judaism has been written and is now over. People change. Teenagers do things they later regret. Especially as we are now in the final days of Judgment and we are very aware of the power of Teshuva (Essay: What is Teshuva (repentance) and How Does It Work in Judaism?) it is important to realize that we have all done things that we regret. Esther dropped Shabbos on national TV but we have all dropped things in our lives.

The beauty of this time of the year is that we have a wonderful opportunity to pick things back up. Hopefully, Esther and all of us along with her will be able to pick ourselves up and be the Jewish people that we truly want to be.

MUST READ UPDATE: Esther Petrack’s Mother Speaks: Esther is observant, it was all editing

Heshy’s Notes: I just wanted to note that Esther Petrack is modern orthodox and therefore automatically disqualified from being a hot chanie, as you have to be a frummy in order to gain hot chanie status, so while she is hot, she would have to frum out out a little more before the status becomes hers.

← The little Jewish community that could
Are you lazydox? →