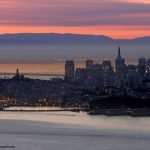 I can’t believe everyone’s so young, it seems like the last time I was here everyone was much older, had that many members died since Rosh Hashanah?

I’m wondering this and I approach the Rabbi to ask him where all the older members went, he’s exuberant, his community is finally taking shape as more and more couples with young children and newlyweds move to the neighborhood.

San Francisco isn’t known for its large vibrant Jewish community, but I’m hoping that will change, being that I love San Francisco and have no plans on leaving the area any time soon, I would love to walk into shul and have a hot Kiddush every week, three different minyanim to choose from and plenty of ladies to look at over on the other side of the mechitza, but this is a long way off.

San Francisco has a bunch of small dying orthodox shuls, a few chabads that barely get a minyan and the Adath Israel congregation which is home to San Francisco’s first eruv, pretty impressive for a shul that until 5 years ago was slated for a certain death when its last member kicked the bucket. I watched painfully on pesach as the chazzan almost fainted during his musaf repetition and had to be replaced by someone much younger who could handle the stresses of figuring out which blessing in musaf to say on the 2nd day, maybe he needed lasek or something, straining of the eyes sucks when you’re up at the bimah trying to make it to Kiddush. The shul was founded by holocaust survivors and many of the founding members are dying out, their children have mostly moved away and that left the community, up until the new Rabbi took over, with little chance of revitalizing a dead community.

I have no idea how he did it, I’m sure dozens of Rabbis and community leaders in similar situations would love to know his secret, but Rabbi Strulowitz’s community is really growing, every time I go for shabbos there’s a new family in the hood.

San Francisco isn’t like other cities, for a city its size it has a dismal amount of Jewish services for the observant folks. It has two kosher restaurants and a butcher, one of the kosher restaurants is not under a widely accepted hashgacha even though it is vegan and the other restaurant is what I and anyone else who has ever bothered trying it out a chillul Hashem (IE worst kosher restaurant in the world) which only stays open because of tourists. Sure there’s a mikvah, a couple of Jewish schools and now an eruv, but it isn’t a vibrant orthodox community by anyone’s standards.

So why on earth would any young orthodox couple move to San Francisco?

Unlike the larger and more vibrant community of Palo Alto in which most people move for school or jobs, people come to San Francisco because it’s one of the coolest places in the world live. It’s very rich and it’s beautiful, add to the fact that you don’t need a car and you have a city quite like New York, but cheaper and easier to live in. The people are friendly, cool and no one is in your face about anything, it’s also much less materialistic than New York and the east coast in general. People in San Francisco value food, art and beauty – more than fancy stuff and you can see that almost everywhere.

So how do you build a community from the ground up?

I cannot tell you how many conversations I have had with folks around the country about this topic. When I lived in Albany we would talk about this all the time, the Rabbi in Omaha talked with me about it and dozens of other folks in the dozens of small and midsize communities I have stayed in have asked me (it’s funny how people think I’m some kind of authority on the subject, when I’m just a social commentator) how to make their communities grow.

The San Francisco community is kind of growing organically, frum people want to move to San Francisco and they need an eruv. No one is coming to San Francisco and asking where the kosher pizza shops and seforim stores are, people make do with what they have, but certain things like young mothers having friends and being able to eat by your neighbors because you know they keep kosher is somewhat important in my opinion. Some shuls in the area have so many non-kosher keeping members that they have unofficial lists of who is “ok” to eat by – not mentioning any names here, but you who you are.

One of the issues I have with the Bay Area in general is how the communities don’t seem to be working together. It’s common to hear someone from Palo Alto or San Jose express shock that San Francisco, less than an hour away, has an eruv, or a daily minyan. I find it weird that the orthodox Jewish communities of the Bay Area aren’t focused on building the entire Bay Area community, which I look at as one unit. The distances are not that great. There are 5 active Bay Area orthodox communities, San Jose, Palo Alto, Berkeley, Oakland and San Francisco. Sunnyvale has a small Sephardic congregation and there are various chabad houses around the area, the largest being the one in Palo Alto which has a daily minyan, but many of the folks in the different communities do not interact, or even know the other communities exist – I find this strange – especially in a place where assimilation and intermarriage is so high. There are something like 300,000 Jews in the Bay Area and not many of them are religious, I wonder if anyone knows how many keep kosher and shabbos out of that number.

As a new member of the Bay Area Jewish community I have been trying to get a good feel for it, I have visited all 5 communities multiple times, besides for Oakland which I only went to once, I have to other northern California communities such as Santa Cruz and Sacramento and am dismayed at the lack of community shown amongst them. It’s kind of like, you do your thing we do ours, but that’s strange to me. Taking it one step further, the lack of contact between orthodox and other movements is kind of lackluster, we are all Jews, everyone has different opinions, but it can’t hurt to acknowledge each other and bring Jews together? Like when I heard that no orthodox Rabbis attend the Northern California Board of Rabbis meeting, what’s up with that? So they do things you don’t agree with, what happened to achdus and ahavat yisroel?

Although it seems like the San Francisco orthodox Jewish community is fragmented, I think the Adath Israel community is shining, I have wondered why the half dozen or so shuls with dismal shabbos attendance in the Richmond don’t just merge – I know, I know, Jews don’t get along and will find any reason to fight. I was really shocked, even though I’m a New Yorker at the fact that directly across from Adath Israel is a small shul which is a basically a breakaway minyan, for I can’t figure out why someone would open up a small shul directly across the street from an established shul other than to show that they really disagreed with that shul.

In San Jose the same thing exists, it just recently closed down, but directly across the street from Am Echad, not such a big shul to begin with is a breakaway minyan that formed when a disagreement over the new rabbi chosen for the shul arose. You can do this sort of thing in a big community, but in my mind forming a breakaway shul over a disagreement seems to go against everything I was taught about Judaism, it’s probably against halacha anyway – especially if the shul being broken away from didn’t exactly have a big showing at every davening.

Please remember that I have only been living in the Bay for 11 months, I lived in Berkeley, Santa Clara and now Palo Alto and that these views are based on my own observations, however I have been to dozens of Jewish communities around the country and Canada and can tell you that not working together is dumb. Maybe they are working together behind the scenes, but when someone who’s been living in Palo Alto their whole life tells you that they didn’t know there was a kosher restaurant in Oakland, that seems like a problem. Yes, I’m the quintessential wandering Jew, I like getting around, I was in San Francisco this week, Sacramento last week and Berkeley the week before, but I want to see these communities grow, because I like the area so much and having more amenities and services can only make it better for all Jews to keep on being Jewish.

26 comments for “The little Jewish community that could”