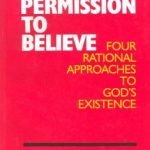 I’ve re-read Lawrence Kelemen’s Permission to Believe this past week and found it just as unsatisfactory as I did when I read it the first time.

For those who are unfamliar with the text, I would suggest reading it — I’d say you can get it for about $10 used on Amazon — as a tool for not only engaging one’s mind but also as a vehicle with which to sharpen your intellect; one’s logical competence and reasoning skills are advanced not only by studying well constructed arguments.  Before I begin, though, please allow me to state my purpose.

Actually, before I state that, I’d like to state what my purpose is not.  My purpose is not to bash Judaism or to undercut kiruv initiatives.  On the contrary, I’d like to elevate Judaism.  But after re-reading this work, I sense that Kelemen was shooting for something beyond what his arguments will tolerate — which is noble, but only as a hava aminah (opening, but ultimately rejected, argument).  Unfortunately, Kelemen makes no attempt to seriously curtail the advancement of poor argumentation, and for that, I can only suspect one of two possible explanations: that Kelemen doesn’t grasp the weakness of some of his arguments, or he does but expects the reader not to.  A third possibility is that he realized his error later but for some reason, was either unable or unwilling to reject it; a fourth possibility is that my evaluation is incorrect, but I would say that it is not — you can be the ultimate judge.  My objection is aimed at the first and second aforementioned possibility — I presume that Kelemen, along with many other people involved in kiruv, don’t necessarily appreciate the arguments he uses with a deep enough awareness to know that they are profoundly flawed.  And when people base their new-found closeness to God on faulty reasoning, nothing good can come of it.  Judaism prides itself on being grounded in reality, and unsound arguments are no way to substantiate such a devotion.

To begin, I wonder what purpose Kelemen has in writing such a work — Judaism is not happy with a God; it necessitates acceptance of the God…of Moses.  And none but Kelemen’s fourth argument (the “Jewish History Approach”) has any relevance to Judaism, really.  Kelemen goes on to write Permission to Receive, in which he outlines rational approached to accepting the validity of Torah mi’Sinai — nearly dissolving any need for his first text.  If you can provide a rational reason to accept that Moses and the Israelites met with and received some form of communication and body of law from God, he necessarily exists.

So let’s begin with the first argument he presents: the moral approach to God’s existence, as he refers to it.  His premise is as follows: Murder (heretofore defined as the intentional killing of innocent humans) is wrong.  For what reason can it be wrong in all places and at all times unless there is a ultimate being, outside the bounds of time and space, who has defined it as wrong.  Kelemen proceeds to outline various circumstances, using both historical as well as theoretical examples, supposedly revealing the moral abhorrence of murder to surpass human-generated convention.  If murder is morally wrong, he concludes, it cannot be because any one finite individual, government or even global community has decided it so — it must be that a God exists to have, without limit of time or space, declared murder to be immoral.

The problem with such an argument is that one cannot agree with its conclusions if one does not agree with its premise.  I would assert that most people faced with such an argument have already been exposed for many years to the Judeo-Christian approach that murder is wrong, and so they sense that murder is wrong because of the existence of a God that has made it so, and that is being used to support the existence of a God — a formally valid argument if you believe in God, but an unsound one because it relies on cyclic logic to establish that the premise is true: that murder is wrong.

I don’t think murder is wrong other than because God has said so, and the same with any other biblical immorality.  I give no greater weight to the impropriety of murder (Exodus 20:12, Deuteronomy 5:16) over that of homosexuality (Leviticus 18:22) — and I would only endow either with any significance because God instructed Moses and the Israelites (of which I am a descendant).  Kelemen makes such a caveat at the end of this first section, but I sense that he doesn’t really expect too many people to think this way — I counter, though, that such a sentiment is more appropriate even if it’s not more common.  It’s difficult for people to pick through their thoughts, figuring out which thoughts and feelings emanate from which life experience, but I can’t really justify why murder (or any other moral transgression) should be inappropriate if not for God — and that’s sort of his argument!  This is more of a trick than anything else — suggesting that these things are immoral and trying to find a source other than God for the existence of such a concept when the source of such a concept is actually God; it’s just that people pick and choose what they want in life — we may like French fries but we don’t necessarily like broccoli.  People think of murder as immoral even if they shy away from God because it seems to be the ultimate violation of someone else’s rights, and deep down, “I don’t want people taking said rights from me.”  But homosexuality?  That appears to many as a victimless crime, despite was Leviticus has to say about it!  “I don’t want people telling me what to do behind closed doors, so I’ll try not to tell them what to do behind their closed doors” — but interestingly enough, Leviticus makes no distinction — and so we are faced with nothing less than Jeopardy-style biblical compliance.  But this means that morality cannot be used to prove God’s existence, because it presupposed it.

62 comments for “Permission to Deny: Part 1”