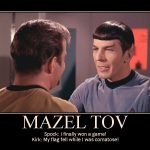 Not because I’m jealous. While I’m not married, I’m also not really looking at the moment, so I don’t resent your evident success at life. And it’s not because I find the concept annoying. In point of fact, I think it’s a fantastic idea! As my friends and I have graduated from yeshiva and college and grown up and moved across the world, it’s become impossible for us to keep up with everyone. So when I hear that so-and-so is engaged, naturally, the first place I turn to is OnlySimchas.

Which is why it’s such a shame the site sucks. Now, I don’t really know if a similar website exists in the secular world, and if so, whether the problem afflicts all of humanity, or whether the trouble is endemic to the Jewish community, but the people who leave mazel tovs are the banes of my existence. I mean it. I hate them with a passion bordering on the insane. And I am completely certain, although I have not taken even an informal survey of any rigor whatsoever, that the fault lies with girls.

If somebody tells me that an old yeshiva friend, say Yaakov Fine, is engaged, I am, as the ray of sunshine I strive to be, very happy for him. “That’s great,” I will think. “I am full of goodwill and well-wishery.” If I remember, the next time I am in front of my computer, I will try and leave him a message communicating the above thought. One phrasing I am particularly fond of is “Mazel Tov!” An oldie, but a goodie.

Imagine my dismay, however, when I find the new couple’s page on OnlySimchas. The ten comments that are already there are all along the lines of:

These are invariably left by all the Miris and Chavis and Ruthies and Dvoris and Tzipis, etc. so I know whose fault it is. And, girls, don’t think you’re fooling anyone because after you got married you officially got yourself a “joint” OnlySimchas account for you and your husband. Everyone knows it’s just you.

Now don’t get me wrong, girls, I applaud the sentiment. I do. It’s just that it’s not a sentiment I can physically express. I just can’t. I am literally incapable of expressing those emotions. (I’m pretty sure I’m incapable of even having these emotions. Granted, I have the emotional range of a fruit fly, so I represent an extreme case. Still, I think it’s a difference of degree rather than kind.) The above sample was very tiring on me even to fake. I had to actually go to OnlySimchas and find some actual posts for inspiration. You’ll notice I left out emoticons and failed to repeat everything three times (is that a lucky number for you guys, or something?) because I (also) lack the ability to do that sort of thing in Microsoft Word.

And it makes me look bad, to be frank. Very bad. Now my measly little “Mazel Tov!”, once so cheerful-sounding to my apparently tin ear, will come out as mealy-mouthed and begrudging. “I hope you and your cursed union rot in the fiery bowels of hell!” I might as well be saying. And that’s really not the effect I was going for. I want to be invited to the reception, after all.

And, honestly, what’s the point of all this exuberance? Are you really this enthused? Then why don’t you call them up and communicate your feelings to them verbally? And if you’re not that kind of friend, maybe you should respect some lower consonant-to-exclamation mark ratio? Sincerity isn’t measured by the amount of asterisks in a sentence. Ever seen a headstone with an emoticon?

So, a plea. Rein it in. Curb your enthusiasm. Let us sentimentally-deprived have a chance to give our good-wishes to the happy couple or new parents or proud owners. Think of all the extra energy you’ll save for texting.

If you are a blogger new or old who needs some attention and would like to have your post featured here, send me an email to [email protected] , I don’t take them all and will tell you if I will post it or not.

← May you be zoche to build a bayis ne’eman b’yisroel together
Boteach writes pro-Gay article: The frummies are pissed →

53 comments for “Why I hate onlysimchas.com”