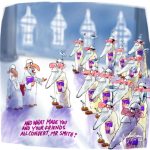 I’ve been hanging with quite a few folks in the process of converting to Judaism lately and all of them have told me their dismay when having learned that they would have to pick up their lives and move to LA or NY in order to complete the conversion process. Is this just part of the conversion process, that part where the agent rabbi says that if you really want to be a part of this you have to do as I say? Or is it part of a larger conspiracy to scare away converts who don’t feel like plucking their families out of their established communities to start anew in a far away land?

Either way, it bothers me, it bothers me that these fine folks who have sacrificed so much to join our religion and have come so far, only to be told that they must take their children out of school, quit their jobs and sell their homes just because the Beis Din feels that their communities aren’t good enough, that smells fishy to me. I can understand this if these folks who were converting lived in places without Jewish communities, but every single one I have spoken to lives in a community with shuls, kosher food, eruvim and mikvahs, so what gives?

If the beis din told the families that they would be finding them new jobs, a place to live and a proper school with friends for their children it would be one thing, but it seems that the beis din is merely saying that if you don’t move – you can’t complete your conversion. It’s like being told there’s no cholent left at Kiddush, such heartbreak and such pains and it seems you cannot do anything about it. Sure, many choose the option to leave and start anew in a large city, but what if you own a house, have children and careers, etc.

I was told of a woman in the Bay Area who wished to convert, she was “frum” for many years and had always walked to shul every shabbos, but the beis din didn’t like the fact that she owned a house 5 miles from the shul, they told her that she couldn’t complete her conversion unless she moved to within 3 miles of the shul, so she has never been able to convert, so you may say that she didn’t want it bad enough – she should have sold her house, but we have no idea why she didn’t sell the house – we only know that this beis din ruined this woman’s life for what they deemed a too far walk.

137 comments for “Want to complete your conversion? Then move out of your community!”