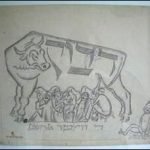 My dybbuk isn’t such a bad guy. Sometimes he helps me out of tight spots, like the time in Yiddish class when my morah asked me to give a presentation in front of the whole grade. I was sweating bullets up there, I was, with my back to the chalkboard, because I hadn’t done my homework the evening before. I never did my homework, especially not in Yiddish class, because going into the term I had had no idea what a preposition was, or a clause, or a dangling modifier– not even in English. And my book assumed I knew all of those things, and my teacher did too, in Yiddish, not English, and I had figured on faking my way through the class and receiving a B minus, maybe after I cried some alligator tears to my teacher and begged for rachmones. But that was before I was called on to give a presentation in front of the whole grade. I hadn’t counted on that happening.

“Don’t worry, I’ve got this,” my dybbuk told me as I tried to keep my clutched hands from shaking the pages full of nonsense that I was holding for effect. I was struggling to keep these little tears from forming in my eyes– I never cry– and my dybbuk knew that too, that I never cry, especially not in front of the whole class, and I think he felt pretty bad for me right about then. Maybe that was why he helped me. I know that grades weren’t that important to him. That was before my dybbuk had really done anything special for me, when he was just kind of an acquaintance that I shared my head with sometimes. He had mostly just kept to himself, probably thinking that it was to his benefit to be inconspicuous, because it couldn’t have been too pleasant to be exorcised all the time and go searching around the world for new people to jump into. Anyway, my dybbuk had never done anything for me, and I had no reason to assume that he would start now– despite his assurances– because he was a dybbuk and I had heard that they were not to be trusted. So I was still petrified– except for my hands, which were shaking like this guy I see sometimes in shul— and even though my morah was prodding me to get started, I couldn’t open my mouth because I had nothing to say.

“Hold onto your nuts,” my dybbuk said, and I did, I grabbed them and held on for dear life, and my dybbuk must have spoken a pretty good Yiddish, because that was the last thing that I remember, and then when I woke up I was still standing there in the front of the class, and everyone was laughing, and I wasn’t the one who was shaking now but my morah, and she was pale, not me, and her eyes were big and she was holding onto the side of her desk, tight.

He covered for me in the principal’s office, too, my dybbuk did, although that was partly for selfish reasons. I could tell it was because I heard my morah inside talking to the principal and even though their voices were muffled I am pretty sure I heard her say the word “dybbuk” a couple of times. My dybbuk probably heard her, too. But he calmed me down, and told me what to say when I finally was invited in there, after I sat down in that tall chair with the leather cushion and metal handles, and after the principal had asked my morah to please excuse us, and she had turned around and given me this odd look as she closed the door.

“Morah Frankel was a little bit concerned with some of the vocabulary that you used in your presentation,” the principal said, and he was hunched over his desk with his hands clasped together, his arms resting on top of some papers, like he didn’t even care if they got wrinkled. I was scared, because his eyebrows were big, and they almost hung over his glasses, and he had dandruff on the shoulders and lapel of his suit, and I was sure that I was gonna get in trouble. He looked like a big storm that was about to break, or he felt like one to me, anyway.

“Poker face,” my dybbuk whispered to me, “keep your poker face on. This guy probably thinks your teacher is crazy, or on the rag, or both. It’s hard to keep thirty vilde chayos from tearing the room apart, and she’s been doing it all year. She’s under a lot of stress. Besides, when was the last time that anyone saw a dybbuk around here?”

And it worked. When the principal asked me questions, my dybbuk told me what to say, and I repeated it word for word. I ended up telling the principal about some old books I had found in my dad’s library, books by Isaac Bashevis Singer, and that I hadn’t known that the language was bad, that I was just trying to learn Yiddish. And as the story went on, my principal stopped looking so much like a storm, until at the end he was almost smiling a little, I think. My morah never asked me to give another presentation again. In fact, she pretty much ignored us for the rest of the term, and when my report card came, I saw that I had gotten the B minus I had hoped for, without even having to cry. I didn’t learn any Yiddish, but that’s alright, because if I ever have the need for it, I know that my dybbuk has got it covered.

At night, in bed, my dybbuk tells me stories to help me fall asleep. He usually talks about Poland and Ukraine, but he also tells me of crazy things that happen in China, India, Venezuela, Africa. My dybbuk has been all over the world. Sometimes he tells me about his old girlfriends. Sometimes he even shows them to me in my dreams.

Once in a while I’ll have to eat a cheeseburger to keep him happy. He likes pork and bacon even though they’re not allowed, but he doesn’t like lobsters. He says they are just big spiders that live in the water. It’s all the same to me. One time he made me smoke a cigarette, and I almost choked, and he didn’t ask me to do it again– but I would, for him. I think he knows that. My dybbuk is teaching me poker, and a game called hrap, but he says that poker is where the money is at around here. Maybe he doesn’t like all the same things as me, maybe he likes some things that my mom calls “unsavory”, but nobody is perfect. Especially not my dybbuk. But he’s alright.