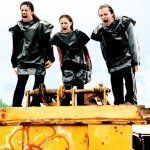 Kahal Am Mirahtzim here in Stanwick Hills, Nebraska is an amazing place.  About half the men show up in black hats, and the other half in knitted kippot (technically called “Kippot Serugot”, but in Telz we would call them “tipot seruchot”).  We all get along and daven together with very few problems.  But sometimes there’s an event that upsets the fragile balance.  This week it was a bat mitzvah in our shul — a bat mitzvah of a kid from one of those families that are not really frum (yet), but apparently they must have pissed off their conservative temple, so they show up at our shul to hold their events. It’s these events that cause the most bizarre things to happen, which can set off a chain reaction.  Like what happened this past shabbos.

We all saw her walk in — no glide in, like on a cloud.  How could you miss her?  That dress was bright and skin tight.  Her radiance outshone even the cutest of our shul-babes.  And the plunging neckline! All I could say is Wow!

My thoughts quickly changed to Torah Thoughts.  I thought of the two Luchos (tablets) — especially of the rounded parts on top, how they curved so nicely. Then I thought of the narrow path through the Red Sea, with the walls of soft water flowing on both sides. Then I thought of neviim — I remembered when David stole the spear and jugs from Shaul.  Yes, the image of jugs and a sword made sense to me just then.  I swear, all types of Torah Thoughts were crossing my racing mind.

I could tell that I was not alone in my thoughts.  All the guys with tipot sruchot, I mean knitted kippot, were peeking over the mechizah with theirm mouths dropped.  The were probably thinking biblical thoughts too.

But the black hatters in the shul took another approach to this situation. The first move was to tilt their hats to the side so that they could not easily see over the mechitza (they hate the fact that it’s side by side). The second move was to shuckle more.  But it’s the third tactic that caused the problem it was the “Yeheyh Shmey Rabbah” yelling response.

Sure, anyone can answer a Kaddish with a Yeheyh Shmey Rabbah — and anyone can yell it loud.  But you know that something is twisting in their knickers when it’s accompanied with that grimace face, they eyes shut tights, the mouth wide and the fists clenched.  That doesn’t bother me; it’s the tritone sound that does.  For those of you who know some music theory, you know what I mean.  Musical details aside, think of it this way — the Baal Tefilah sings a nussach on some key.  Most people (who have any modest ability to hear music) will respond on that key.  The fineshmekers in the shul will harmonize a third up, and the oddballs who like Gregorian chart will harmonize a fifth up.  But the black hatters who are totally distracted by the sensual image of the twin mountains har grizim and har eval, busting in the blouse of a guest, will yell their response in the augmented fourth. Basically, it sounds like a screech when everyone else is responding normally. They don’t know it’s a tritone, they just know that it’s a loud release of pent up energy.  Yelling the Yehey Shmei Rabbah like this is almost like doing the Lion Pose in Yoga.  It releases the facial muscles and concentrates energy upward.  Much needed when the blood energy is concentrated down.

Turns out that the guy davening mussaf was a kippa serugah-nik and got really upset when he heard the screeching from the black hatter section to his chatzi-kaddish.  So he chose to sing campy B’nei Akiva songs for kedusha — the ones that black hatters really hate.  He really pissed them off with singing the Hatikvah melody for visechazena.  A few nasty glances back and forth, and I thought we’d have a fight.  I could imagine the siddurim flying back and forth (and the black hatters would win, since their Artscrolls have a harder cover than the new Koren’s do).

All this over a woman — a Miriam Monroe — with heels and a purse, and a cute little doilie on her head. One who would never come back to our shul, since she was just some random hottie-guest of a conservadox family who’s kid had a bat mitzvah this shabbos.

Come to think about it, she might come back to our shul.  And if she does, I’ll have to thank the brave-soul, our daring black-hatted kollel rabbi, cuz he was right there all over the blondini at the Kiddush telling her about the classes they run.  I even overheard him telling her that he wanted her to join his “Introduction to Yachin and Boaz’s pillars” class that he’s starting up soon.