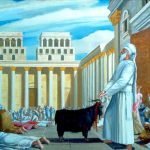 Over Yom Tov I was chatting with a kohen who’s an acquaintance of mine. He’s in his mid-50’s and single. He really wants to get married, but there are very few prospects for him. He’s not insistent on marrying a younger woman who can still have kids. He makes an OK living and is a nice guy, but wouldn’t be considered a top “catch” by most.

However, in his age bracket, so many of the women he’d normally be able to date are out of bounds to him because of his status as a kohen. So he can’t date anybody who’s divorced, which is a really tough thing, because he’d like a family and recognizes that he’s not likely to have any biological kids of his own. He’d love to be a stepdad to kids of any age, young or grown, and be able to have a real family sitting around the Shabbat or Yom Tov table. But because he can’t date divorced women, he sadly envisions a future of, at best, just him and a wife. Widows are in relatively short supply. And even among the never-married women, many of them are off-limits because they’ve had a physical relationship with someone non-Jewish in the past, usually before they became more religious.

And that brings up another issue, of course, that being the probing into the sexual history of any woman who might date a kohen. The discomfort of having to disclose things like that is huge. It also forever relegates women who are ba’alot tshuva to second tier status. The frum community makes assumptions about their sexual history and either doesn’t bother to set them up with kohanim or feels no qualms about asking them personal questions that they’d never dream of asking their “pure” FFB daughters. (Or of asking men, making the whole thing quite sexist.) But in this day and age, not all of those FFB girls are so “pure” either. Some have had sexual relationships with men who aren’t Jewish. It’s a silly thing to ask a 40 year old woman to be a virgin (that’s another whole post) and some of their sexual relationships may have been with gentiles.

A friend of mine dealt with this situation a few years ago. She grew up Jewishly unaffiliated and very naturally had a boyfriend in college with who she had a sexual relationship. She became Modern Orthodox in her early 20’s and got engaged at age 25 to a guy who was on the frummer end of Modern Orthdoxy and happened to be a kohen. She then had to undergo the humiliation of her case being discussed by a bunch of Baltimore rabbis who debated if she was permitted to her fiancée. They questioned her about the nature of her sexual relationship with her college boyfriend and whether they had always used a condom, which might have meant the sex wasn’t “real”, thus creating a heter for her to marry a kohen. In the end, even though one rabbi said it was OK, the other few said no, and he broke off the engagement and broke her heart.

The Torah is pretty clear:

But in this day and age, when we’re not even sure that those who claim to be kohanim are kohanim, and when nobody’s bringing sacrifices in the Temple, isn’t there a legal workaround? I’m not a halachic expert on the issue. I do know that the Conservative Movement made a halachic ruling that a kohen may marry any Jewish woman based on this being a sh’at techak, an emergency situation, in which it’s preferable for kohanim to marry divorced women than to intermarry.

My personal advice to my acquaintance, above, was simply to date observant Conservative women who are divorced, and not to worry about the prohibition. Why should he be denied happiness? But I don’t think he’ll be taking the advice, as he takes the Torah’s prohibition very seriously.

But it seems to me that this archaic obsession with a woman’s purity is outdated and insulting.