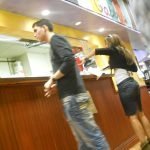 Brooklyn – A kosher restaurant is in hot water after it posts hidden camera pictures of neighborhood Hot Chanie’s. The owner swears he knew nothing about the camera and claims that it’s a plot by competing restaurants in the neighborhood to run him out of business.

The Flatbush neighborhood of Brooklyn is home to an estimated 700 Hot Chanies, making it a ripe spot to catch these ladies on camera. The close proximity to sheitle stores, easy double parking and crowds to gawk at them make a great place to see and be seen. “There have been dozens of attempts at monetizing our Hot Chanie population” said Flatbush Alderman Jack Buchenholtz, “I have heard about the Hot Chanie cam for some time, no one was able to confirm it and no one was able to quantify whether or not it was leading to economic development in our area”.

Many men we stopped in the street readily admitted that they had come to the neighborhood to gaze at the local exotic women. One man told us that he had stumbled upon the Hot Chanie Cam website while searching for the now defunct frum swingers site shaindy.com, “I was searching for this shaindy.com site and suddenly I had real live ladies in super sexy shietles staring back at me, I was hooked, when it said they were mostly caught on hidden camera in Flatbush I had to make the trip” the man, like many others had come from Lakewood, not known to be a bastion for Hot Chanies, due mostly to the erliche yidden that refuse to exchange wigs and stilettos for kollel paychecks and food stamps.

After speaking to several self proclaimed Hot Chanies, it seems to us here at FS News that they mostly like the attention. One wig shops owner told us that he had pretty much sold out of all his “hot chanie” shietle lines and was blaming his increase in sales from the latest Hot Chanie craze to sweep the neighborhood. I sympathize with the restaurants for doing this, the recession has hurt many businesses – kudos to them for thinking of a way to stay afloat during these turbulent times.

Still others are calling it a crisis, the tznius crisis, the priitzus crisis and the sexy sheitle crisis have all been thrown around.