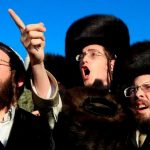 Dozens of angry Orthodox Jews gathered outside a controversial wax museum depicting scenes of Jewish life which just opened in New York City. The dark humor and hyperbolic drama  associated with the wax museum has been called blasphemy by many Jewish leaders, who demanded they shutter the doors before they open.

Some scenes on display have elicited such heated outrage that psalm vigils have been called to prevent such destructive exhibits from being shown to the public. The new museum features exhibits that show:

Rav Ahron debating with his sister the mathematician

I don’t know about you, but I’m pumped about the new museum and can’t wait to check it out.