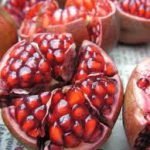 Brooklyn – From the time Moishie Shulevetz was a small child he had many questions, he was an inquisitive boy who grew up to be a very intellectual young man who eventually left the path of Judaism because he discovered one day that for some two dozen years his rabbis and community had lied to him. During the high holidays one year, Mr. Shulevetz decided to investigate the Pomegranate seed mystery for himself, for years, he had been taught that Pomegranates contained exactly 613 seeds in them to correspond to the amount of biblical commandments in the Torah.

Like many intellectual youth in the orthodox community, Mr. Shulevetz had many unanswered questions, questions that bothered his Rabbis and peers, he wondered why the orthodox community didn’t donate their leftover lulavim to palm Sunday charities, why no one wanted to admit that magic mushrooms were partially responsible for the tripped revelation at sinai and where the minhag to make esrog jelly came from, but he was especially bothered by the Pomegranate seed mystery – he just couldn’t understand how every pomegranate had exactly the same amount of seeds – so he decided to investigate himself.

“I sat down one day with a fresh rimon and decided to actually count the seeds” he relates his story as tears stream down his face. “I expected to find exactly 613 and when I found significantly less than that I called my rebbe to tell him that our counting methods were off” His Rabbi told him that he was just like benai yisrael in the desert and they too had miscounted – or that he may have lost some of the seeds, but Moishe knew the truth and since then he has been a non-believer.

FS News is of the opinion that urban legends used to strengthen the evidence pointing to the authenticity of Judaism are usually fake, such as the legend that the Lubavitcher helped build the Verazano Bridge – yet to be verified by anyone, but told to strengthen the resolve that prior to dabbling in a messianic lifestyle he was a brilliant civil engineer – thereby proving that even a lowly learner-earner could become great.

← Can you be frum and liberal?
Orthodox Jews protest new wax museum →