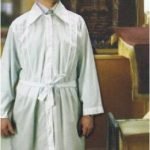 I know, it’s right after Yom Kippur and already I’m talking about sex, but someone asked me to write about what fun stuff you could do with a kittel and there’s nothing more fun then getting an unexplained boner in shul and not having to wait until it retreats to move about, of course if your kittel opens and reveals your woody in the middle of hininee this could pose some problems (I have always thought the reason behind the groom wearing a kittel was so that he could be completely comfortable in his pre-yichud room boner state of mind). This reminds me of the time when I was 13, I was in a shul in Sharon, Massachusets for the bar mitzvah of Avi Pultman and during kabalas shabbos I got a raging boner, there was no reason for the boner mind you (at this point I hadn’t even figured out how to put my boner to good use). I swear to you it wouldn’t go down, if only I was wearing a kittel…

Hidden shul boners aren’t the only thing fun about wearing a kittel. I wouldn’t wear a shirt if I had a kittel on, heck, I might forgo the pants too. If only the darned things weren’t so see through, I wonder if they ever do wet-kittel contests?

I figure if you’re wearing your kittel you might as well get a stethoscope and pretend you’re a doctor and head out to the Tesla dealership to take a test drive or go pick up some girls at kiddush.

Honestly the only other thing I can think that’s fun or useful about wearing a kittel is not wearing any pants, but then you would have to get a non-see through kittel and I am not sure that is possible.