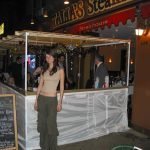 Making Reservations for Succos this Year.

Things are getting pretty interesting in this town of Shaker Flats, MN.  My favorite shul, Congregation Eruv Rav, invited all shul members, and especially the children in the community, to a sukkah decorating party this Sunday, after Yom Kippur.  All are welcome to bring arts and crafts supplies and make this the nicest sukkah ever.  The theme this year is Chanukkah!

I thought that was an odd theme, but the shul maskil (the only guy who reads nach and books about Torah written by people with Ph.Ds) told me that there is a relationship between the two holidays.  Both are 8 days long, both celebrated a dedication of the Bais Hamikdosh (look it up in nach), and remember: the Beis Shammai’s reason for lighting fewer candles every night was based on the korbanos of sukkos — we don’t hold of Beis Shammai, of course.  So we all have to make Chanukkah decorations for the shul sukkah.  Still — it’s pretty odd.  But then I learned what the real reason was…

Turns out, the shul has a new policy this year.  Members can’t use the shul sukkah doing yontif this year.  We can only use it for kiddush on the first days.  Last year we had families actually bring their food to the shul sukkah and use it for meals.  Crazy!  They said that they did not have a sukkah of their own.  Peasants!  No — Vagrants!  It made the Shul Board so uncomfortable to think that we have such people in our community.  Members, no less. They thought about the problems that allowing people use the shul sukkah might bring — you know, like insurance, cleaning up, and stuff like that.  But Channukah provides the great motto: “vi’ein lanu rishus lihishtamesh ba’hem, ella lirosum bilvad” (meaning: we don’t have permission to use them, only to look at them).  This originally referred to the channukah candles, of course.  But it works in this context too.

The good news is that I have a nicely decorated sign with those exact words.  I used to put it up on the mechizah of my old shul every Purim.  That is, until the Ruv got the joke.  So I plan to bring that sign to the Sukkah decoration party next week. I think it sends the right message.

I heard that  the proletarian members of the shul are planning to go to Congregation Chevras HaOvdim for their meals.  The webmaster there is setting up an online reservation system for their shul sukkah using opentable.com.  So if you want to eat in a sukkah this year and you don’t have your own, make your reservations early — or just plan on eating shehakol foods all week.

← Kol Nidre is the chazzan’s world series
Do you know what a Monsey House is? →

15 comments for “Making reservations for succos this year”