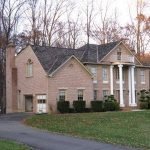 I decided to take a ride through the pre-fab home neighborhood right near my house today, I was on the tail end of a morning ride around the hood and the neighbors had always intrigued me and I was hoping to see if their hood was as white trash as I thought it was. I was happy to see shirtless men working on their lawns beer can in hand, under the hoods of their rusting muscle cars and just sitting on their stoops enjoying the strange overcast weather which has engulfed the south bay today.

The homes were all of the prefabricated variety, you know, the one’s you see be driven down the highway in this trucker caravan with those little follow-along vehicles with flashing yellow lights and official signs? Those are the ones, I like to think of them as an upper class trailer park, they aren’t actually trailers, but they aren’t actually houses in the real sense.

I was enjoying my time in the neighborhood when suddenly my eyes were greeted by the strangest sight, amidst all of these wood paneled double wide homes there was a monstrosity known to orthodox Jews like myself as a Monsey House. At the curve in the road on a small cul de sac was this pink brick home of magnanimous proportions especially when compared with the other homes in the neighborhood. It had an enormous garage, strange looking windows and had the look of those sprawling McMansions you see on the side of the highway in the west with signs saying things like “homes in the low $160s” with names like Willow Creek or Spring Meadows, neighborhoods filled with these homes are usually tough to exit, kind of like casinos, because everything looks the same and you come to realize that everything is the same – even the landscaping is the same.

The Monsey House is a cultural phenomena that has spread outside of Monsey, but it of particular interest because it is one of the few ways in which orthodox Jews try to outdo each other in the material world. Orthodox Jews don’t really know how to be wealthy, you don’t see Maseratti minivans and most fancy cars can’t fit a family of 8, besides for that Mercedes R63 AMG minivan which did 0-60 in 4.3 seconds – I actually knew a frum dude who had one – but it was a real sleeper car. However, frummies do know, or think they know how to show off through their ridiculous homes. Howard Roark would cringe at the Monsey House.

The Monsey House goes like this. The wife of a husband with hocker tendencies wants a knew kitchen, but the new kitchen she wants is bigger than the house itself, so the husband decides to pull the knockdown except basement property tax scam, so the owners knock down the house and leave the basement to keep their same “floor plan” or something like that. Then they decide to build a house triple the size of their neighbors, set back on the lawn so they can have the house on the hill, Monsey is hilly so this tends to work. Other ways to build a Monsey House, are to have it built for you using the cheapest materials possible so everything looks real until a windstorm comes and starts blowing those “bricks” off your house.

Most Monsey Houses contain a very large kitchen with up to 3 refrigerators of the cabinet variety, those fridges that blend into the cabinets that cost a lot of money. The true Monsey House needs a marble island with a sink in the middle of the kitchen, this is where the shalach manos divide and conquer game takes place with members of the family and where the large bowl of mango strawberry and lettuce salad is placed when the family hosts a vort.

The true Monsey House must look big, even if it isn’t, the best way to do this seems to be through ridiculous looking columns in front of the house. I have seen homes in Monsey that haven’t even been knocked down or redone, contain columns right on the front stoop to make it appear cool – it almost always looks dumb – no matter what you do.

The other thing that Monsey Houses must have is no large trees. I have recently read that the reason many Jews afraid of nature and the woods is due to the treatment they received for hundreds of years from their country peasant mates in the European ghettos, whether or not this is true is up for debate – it’s just a theory. I would be willing to bet you that if the frum residents of Monsey had their way, they would raze all of the greenery in Monsey and build Monsey House monstrosities with paves lawns.

Monsey House dwellers do not do their own landscaping, instead they tear down all of the old growth trees on their property and have bushes near the house and that is it, that way you can see their Monsey House when you’re driving around the neighborhood looking for that vort you’re going to.

60 comments for “Do you know what a Monsey House is?”