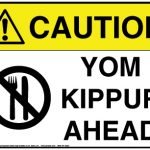 A few days ago, Heshy commented (satirically, I might add) about trying to do teshuva for things that he knew he wouldn’t stop doing and perhaps couldn’t even wait to begin doing again.  I find that this perception is quite a common one and thought it would do a lot of people a lot of good to address it before we begin Yom Kippur.

People don’t understand God, and it’s fairly obvious from even a most cursory review of Tanach that God knows and appreciates this — and that’s because God does understand us.  So when he gives the descendants of the Israelites thousands of commandments to follow, it’s only consistent with reality for him to also provide a way in which to we can  express remorse for violations of the law.  By providing a rehabilitation mechanism, God has essentially instituted a “Sorry Clause” — and it’s a good thing that he did.

But there are those who take this in entirely the wrong way.  In fact, they may frequently feel as though they need to say sorry about having said sorry without really meaning it.  So yes, that’s a real problem — one of the basic tenets of the teshuva process is called azivas ha’cheit (release of the sin), referring to the intellectual inconsistency of apologizing for something while one is still engaged in it.  The Talmud refers to this logical contradiction with the idiom tovel v’sheretz b’yado (immersing [for the sake of purifying oneself] with [an impure] creature [still] in one’s hand).

There are many husband/wife stereotypes, but one of them is that wives ask their husbands to do lots of little chores for them.  Mail this, buy that, pick up this, do that, get this, make that.  And when a husband fails to follow these directions, the wife will get upset.  This is fairly reasonable — the wife expects her husband to be responsible and his irresponsibility can be very irksome.

And what about when the husband who forgets to buy the milk, pick up the prescription, get the dry cleaning and mail the already late bill payment all in one week? — that can be really upsetting!  But that weekend, the husband gives his wife a card and some flowers, apologizing for the rough week he caused and promises that he’ll do his best to get back on track and be more responsible.

Now, the wife knows that this is not the last time her husband will fail to complete such important tasks, and it will likely not be the last time he fails to do so once a day for an entire week — so is it just that she can be so easily tricked because he gets her flowers?  What is it with women and flowers?!

No — it’s that the wife senses that she really knows her husband and that, deep down, his apology is sincere.  So yes, it might will happen again.  But as long as the husband is only inconsistently irresponsible, the wife can focus on the somewhat consistent responsibility that he exhibits.

Now who will look at such a wife and remark, “I can’t believe she let him go after what he did!” — well, as long as the husband’s infractions are minor, probably no one.  And that’s because people see men and women and the relationship between them as real, but, unfortunately, they all too often see God and their relationship with him as something less than real.

Why is that?  Because people like to mock what they don’t understand.  If a parallel is drawn via allegory, they mock the allegory as childish or preposterous, but if no parallel is drawn, they complain that “God’s mysterious ways” are just too ridiculous and absurd for them to swallow.

So when I talk to God this Yom Kippur (much as I try to do every other day of the year), I know that I’ll try to think of our relationship as similar to the relationship I have with my wife — and by that, I mean to say that I will contemplate a real connection with the Ribbono Shel Olam, the “Master of the Universe” who not only knows my thoughts, but also knows the thoughts I think about my thoughts.