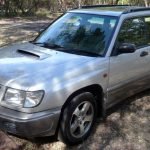 I would say the first Frum Satire Fundraiser was pretty successful, I was able to scrounge together a few grand and buy the second car I went to look at, a 1999 Subaru Forester (yes I know it’s a lesbian car) with 144k miles on it. Of course, it needed a little work – cost for the car has come to $3600 plus $296 in DMV fees (I spent 5 hours at the DMV on Monday and I’m officially a California resident now)

So yeh, the fact that some of you fine folks gave me money was a real boost for me, it made me think that there is this huge silent majority out there, the people who don’t comment and generally don’t communicate with me. I was kind of surprised at the amount of non-Jews who gave me money – it appears that there are a lot more non-Jews reading my site than ever before and that’s super cool, maybe I’ll become the insiders source for orthodoxy and explode with ad-revenue.

I raised close to $700 all together and one person even sent me some cash in the mail. Of course I had to borrow some money from a friend who wants it back this week – which means I have to borrow that money from another friend to pay him and due to the fact that I already booked my flight for succos several months in advance – I’m missing a lot of hours that I need, but the Lord provides.

Thank you all again – I would have pictures, but my camera broke – so if anyone wants to donate an old digital camera I’m down. Oh and thank you to Ari who gave me his old iPhone today – now I feel so northern California.

19 comments for “I got a car: Thank you for your donations”