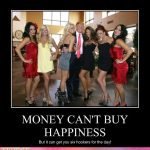 My friend has a problem, he hates his job, he hates his single life and he hates New York – when I tell him to leave his job and leave New York, he says that he has a steady paycheck and can’t afford to leave. I find this all very entertaining and if you heard me yelling at him on the phone you would think I was having a fight, rather than talking to a friend who’ve I’ve known for almost my whole life. My argument is that he has all this money saved up, lives at home, doesn’t have a car and therefore has no expenses and yet he continues to brave the world of depression because he’s scared to leave his current situation. Every time I talk to him, he sounds worse, like he’s going off the deep end, yet he continues to say things like “if I just met the right girl” or “when I get married, things will be better” really now?

I have been meeting more and more folks who are my age and divorced and one of the pieces of advice I hear from these people is to never convince yourself that marriage will solve any of your problems and that you should know who you are and what you want before entering into marriage.

Everyone has problems, plenty of people have financial concerns and plenty of people have mental concerns, some have both. I have been talking to my father quite a bit about money recently, he calls me up once a week to ask me if I’m going to be making any money soon and my responses have recently become “but pop, I’m so happy at my current job, shouldn’t we value happiness and healthiness more than money” and then he goes into some rant about the commies on the left coast getting to me. (for those who know where I work and what I do – it is not talked about here because of contract agreements, so I would appreciate if you didn’t mention it in the comments)

One of my biggest fears in life was that I would never figure out what I wanted to do, I’m not sure that I’ve figured it out yet, but for the FIRST time in my life, I look forward to work every day and love what I do, I can’t say I know many people who have that and I feel super lucky, unfortunately, the frum community is obsessed with money due to the costs of being “frum”, but I guess I’m obsessed with being happy and healthy, more than having enough money to send my kids to yeshiva (where there’s a will there’s a way, I’ll worry about it when the time comes) I am in an industry where I can take my skills, once I learn a heck of a lot more, elsewhere and make very good money – I think of it all as a good education and it’s amazing how I landed here, I would have never thought to be here in a million years.

Luckily for me, my type of ladies understand this.