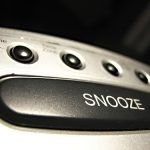 Getting up for shul is fine and dandy when you have to be at work right afterward, but try getting up at 5:30am when you ended work the previous night at 11pm and don’t have to be at work until 3:30pm – it just doesn’t work well. I am just about at the level where I can set my alarm with the thought that I will probably not wake up, but at least I set my alarm.

When it comes to waking up in the morning for shacharis there are a bunch of different levels for me. If it doesn’t cross my mind the night before, I know I’ve sunken low – but last night I decided to set my alarm for 5:30, a nearly impossible feat, considering my habit to read into the wee morning hours.

When my alarm woke me up this morning I actually considered waking up, to the point that I hit snooze for 10 minutes and dozed while I debated it with my yetzer, the yetzer tov won and I awoke to a pitch black chilly morning. I got to shul a few minutes late, but got to say slichos. A few years ago, after a being frustrated with catching up to slichos for years – I decided to just go with the flow and not kill myself, so I find myself reading the English and wondering about what exactly the siddur means by “We have become perverse” or that “we have been abominable” – I wonder if abominable has anything to do with the snowman?

So I’m sitting half dead through slichos and shachris wondering why Palo Alto’s sephardic population tripled, I figured Bar Yochai in Sunnyvale didn’t have a minyan since the Rabbi was there. I began to wonder why young “cool” spehradic guys always wore tight pants that were too short for them and why sephardic siddurs had stretched letters with weird stuff in the middle of the letters.

Suddenly a bunch of brown ladies showed up and I was soon informed there was a bris. I praised the lord and felt the need to tell everyone around me that God rocked and that showing up for shachris and getting free breakfast was almost as good as getting an unexpected heicha-kedusha.

Two brisim in a week, I was at one in San Jose on Sunday, but I knew about that one so it didn’t elicit the same joy. I waited around while I thought about the interesting fact that the people who tended to be pro-choice, anti-suicide and so on – were the same people likely to defend the “religious” right to do a religious circumcision (I actually started struggling with this thought – since as a religious dude I would have my son have a bris, but I may also have these complex ethical thoughts about it)

Whatever ethics may be involved, once I saw the hash browns, eggs, pancakes and bagels I really didn’t care. Go rocks, but getting up slichos still sucks.

9 comments for “Getting up for slichos (selichot) sucks”