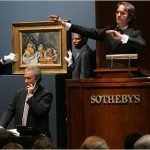 Lawrence – One orthodox congregation is not taking any chances with its traditional High Holiday auction this year, they have decided to take the auction out of the sanctuary and make it social. Temple Beis Hagaiva board members unanimously agreed to scrap the auction after two members “nearly killed” each other last year when they entered a bidding war for opening the Ark during the Yom Kippur Neilah service.

Many synagogues rely on the High Holidays for funding, people tend to feel more inclined to give to their congregation with the hope that God may give them communion if they were to say, help pay for the Kiddush Clubs herring supply. Auctions go from lame quiet affairs with an auctioneer essentially begging congregants to give them money in exchange for an opportunity to bless the Torah or to be the water boy for the shofar blower to an all out raucous affair complete with yelling, screaming and sometimes violence.

It seems that the two members who became violent during last years auction were both going through “tough times” as some of their acquaintances told us. Although Lawrence is known as a wealthy Jewish Ghetto, many Jews move their for status and it appears that both people who began to bicker about their bids, couldn’t actually afford the bids they were making. “I swear to God, I haven’t seen anything like it since the breakaway minyan started in the social hall” one member told us.

Apparently Temple Beis Hagaiva has had a history of violence, the breakaway minyan formed in the social hall sparked heated debates amongst board members and rumors of pizza shop brawls emerged, but were never confirmed.

Outside of Temple Beis Hamikdash where we were stationed to get a word from the Rabbi, many folks expressed disappointment that auctions took place in such a holy place as the sanctuary in the first place. Many folks simply think it’s a decorum issue, especially in a place like Lawrence, where you have people known to spend $5000 on ladies hair pieces – who would love to get up in synagogue and outbid their friends. It’s just not right.

← Hocker Hall of Fame inducts 4 shomrim who were shot
Do you get the High Holiday blues? →