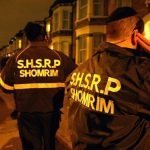 The Hocker Hall of Fame in Boro Park will induct the 4 shomrim who were shot while chasing a perv last night. Apparently the man was caught fondling himself near a girls school and a chase ensued. Then he pulled out a .22 caliber pistol and shot four of the shomrim. They were transferred to a nearby hospital and are in stable condition.

Shomrim are traditionally seen as the unsung heroes of the orthodox Jewish community, they keep the neighborhoods safe, the late night delis and local cell phone stores in business and they become shomrim because they care. Being part of the shomrim also grants you membership into an elite group that few are part of – you are now a hocker.

Hockers typically belong to organizations such as hatzolah, shomrim and volunteer firefighters, many hockers are also “in real estate” “in business” or “in construction” they tend to travel in packs, or make enough noise by themselves to be thought of traveling in packs and wear their bluetooths proud, the wives of hockers tend to be hot chanie’s and enjoy the time honored classic of spending their allowances on sushi and overpriced human hair pieces.

The 4 shomrim shot are viewed as heroes to the hocker community, giving shomrim a legitimacy not previously enjoyed. Previously, shomrim had been ridiculed as being a young neighborhood watch that makes sure Deli 52 and Subsational are crowded with shomrim jackets.

The Hocker Hall of Fame is located in the basement of Chap-A-Nosh, the ceremony will take place this coming Wednesday night.

Notes: Sources tell us that they have not identified the man, but that based on prior cases he was probably not frum. Unfortunately frum pervs like boys, not girls.

Hesh What the heck are shomrim?