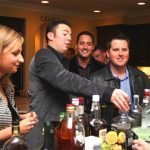 I’m standing outside getting some fresh air when the cop pulls up, instinctively I drop my beer bottle onto the cool grass and it hits my big toe, I mutter some curses to myself as the cop passes me. I wonder if it was necessary to drop my beer onto my toe, would the cop have charged me for having an open container in public? I honestly had no idea, but I had seen enough American Pie style movies to know that you didn’t mess with suburban cops in wealthy towns where there was nothing to do but break up loud college parties and pull over the occasional cyclist for running a stop sign.

The cop was standing on the stoop as he asked another guy where the owners of the house were. I walked back in and hopped on the already long bathroom line. The music was thumping, the big flat screen TV was playing some tripped out screen saver and there was a circle of about 12 very good looking Asian girls dancing with each other. I looked to the other side of the room and saw a bunch of Persian guys with spiked hair talking to some busty blondes, I only knew they were Persian because one of the curators of the Moishe House in Palo Alto is Persian, the girls on the other hand were most definitely not Persian, at least the hot probably fake blonde with the tube top and the large dangling silver cross waving across her cleavage didn’t look like she was.

There were a bunch of people sipping on drinks while soaking up the warmth of the in ground hot tub and I was talking to some guys on line for the bathroom who had told me they found out about the party from the medical school mailing. Turns out someone had sent the invite to the party to the Stanford Med School and a lot of those folks turned out. I guess they assumed that a bunch of nerdy Jewish doctor wannabes would show up, but that was hardly the case.

I had half expected the party to be like the barbeque I had gone to last Sunday. It was a barbeque run by Jewish Study Network (JSN is the Bay Area non-chabad kiruv organization) , I figured it would be interesting to see the new Moishe House, I may meet some new people and at the least I could watch as a bunch of Kiruv Rabbi try to make inroads at the new Moishe House which they have been granted access to because the four dudes who run the thing are friendly with most of the JSN Rabbis. I swear, I could see the rabbis were salivating over the opportunity to have an in at the Moishe House which was sure to attract dozens of young Jewish adults over the course of its life and many of these folks would be unaffiliated – if there was something called kiruv porn – access to a local Moishe House would be it.

The barbeque was fun, but there were a lot of weirdoes there, I assumed there would be. I have noticed that a lot of the folks attracted to kiruv situations in very assimilated places are strange or awkward individuals and I was assured by Brian Smith that this party would be nothing like the barbeque. His exact words were “come to the party on Saturday night, you’ll have a lot to write about.”

Parties like the one I attended at the Moishe House on Saturday night are not my thing. I never enjoyed shouting to a bunch of done up people I don’t know who are trying to impress each other enough so that they may not go home alone. I don’t really drink, I don’t really enjoy the type of club music or dancing that goes along with that, I don’t dress like the people who go to these things, I’d rather be having a nice conversation over tea, I usually don’t fit in and I generally don’t like the club or loud party atmosphere. With all of that said, I can’t say I didn’t have a good time. If it wasn’t a Jewish event, it may have been different, but being that this provided an interesting look into a world I don’t look at enough it was a good time – I even drank two beers – let me commend the folks at the Moishe House for providing good beer. The top layer was warm, but getting my hand to the bottom of both coolers allowed me to get an ice cold Fat Tire Ale and a bottle of Blue Moon, I also noticed Sierra Nevada in there as well – not bad for a college party.

I noticed that everyone was dressed up besides me, I was just wearing a t-shirt and the same pants I wore for shabbos and sandals, everyone else was dressed to party (which really means they wanted to get some) I wanted to get some, who doesn’t, but I don’t dress up for these things – I go as myself and don’t really like the prospect of getting some – as nice as it sounds it’s not really thing either and hasn’t been in at least 10 years.

What on earth is Moishe House?

Imagine a Jewish Old School? Moishe House is a foundation that subsidizes the rent of a house for young Jewish adults who want to put on events for other young Jewish folks. For instance the Moishe House in Palo Alto gets about half of its rent paid for and a budget for events, such as the party they threw last night. On Sunday night they had a friends of the IDF barbeque and last Sunday they had a JSN barbecue. They throw Shabbat dinners and I’m sure they will be doing loads of interesting events. Other Moishe Houses have yoga and hikes, some have cooking classes, really any event to bring young Jews together.

Unlike most Moishe Houses, the one in Palo Alto isn’t run by a bunch of super left leaning hippies, I have met a bunch of other Moishe House types and they mostly seem to be really left wing secular Jews who want to do good. The Moishe House curators of Palo Alto are two doctors and two PhD’s and they are definitely not hippies, nor are they left leaning, while I wouldn’t call them frum, the house is kosher, they keep Shabbat and they hang out in orthodox shuls – so all the Rabbis know them. It also seems that they know a lot of people or have good connections. Both of the events I attended were fairly large, with the barbecue having about 50 people and Saturday nights party having close to 200 people in attendance. From what I understand, many Moishe House events are more intimate and small. Maybe I’ll even meet some nice Jewish girls?

39 comments for “Partying at the Palo Alto Moishe House”