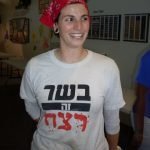 I was sitting at a seder once with my family at a hotel, not knowing my father was how he is, this young girl at the table expressed that she was a vegetarian because she felt it was morally wrong not to be. My father basically tore her new one with a talmudic discourse why she was basically a kofer for saying that anyone who partook in the beis hamikdash was morally wrong. He went on and on about the crazy liberals and Jews who didn’t know a blatt gemera from a hole in the wall, she cried, my brother and I left the table and my father continued to yell about the farshtunkanah liberals – classic! Even Rav Kook who people cite as their source that you can be frum and a vegetarian, ate chicken on shabbos. So that begs the discussion of whether you can really be a frum vegan – vegetarians eat fish – vegans won’t even wear a sterimel and everyone knows you can’t be a frum yungerman without a streimel.

Golus: We don’t make sacrifices for the sake of purifications, lots of animals are saved.

Yom Kippur: We don’t wear leather and we don’t eat, must be good for Vegans – they always seem so skinny anyway.

The Nine Days: Imagine a world where the Jewish vegan doesn’t have to explain to everyone why they don’t eat flesh? Now imagine that every kosher restaurant started serving tofu – even some of the frum ones.

Tzar Belly Chaim: You can’t torture animals is in the torah! Sign me up. I am sure they talked about this one a lot at the Hazon Food Conference.

Aver Min Hachai: At least those Jewish meat eaters can’t rip off a limb from a live one. I wonder if Jewish Vegans ever have signs saying this at red lobsters.

Rav Kook: He may have eaten a small piece of chicken on Shabbos, but to have such a great rabbi as ammunition for your “frum and vegan” arguments is a pretty big deal.

Torah scrolls: Can you imagine how many cows it takes to make one sefer torah? Then again, can you imagine how many trees we are saving by making it out of cows. Now factor in the amount of water and land it takes produce one cow and you may be able to argue that it’s better to use cows – but Vegans probably won’t listen to any argument to kill a cow.

Beis Hamikdash: I think this would be my worst nightmare if I were a vegan, sacrificing living creatures to purify us for our sins and to thank God for providing those creatures that we eat. Seems pretty much antithetical to veganism.

Tefillin: I wonder if any vegans have tried to make tefillin out of pleather or faux leather? Do frum vegans wear tefillin?

Mezuzah: Just another excuse for parchment

Parah Adumah: So let me get this straight, you take an endangered species and burn it for its ashes to purify you. Sounds like a waste of a perfectly happy cow.

Streimels: At least a mink coat keeps you warm, but streimels don’t even have ear flaps, they are a useless way to use a perfectly innocent animal – besides beavers aren’t even kosher (for a two weeks a month) I couldn’t control myself.