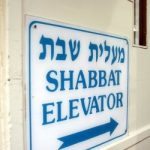 Most of the folks I grew up with or knew on the upper west side took the elevator. My friends were of the “oops” variety, they would sneeze or nudge the button with their shoulder. Some people were of the “excuse me could you hit” types who would wait until someone showed up to take the elevator, hop in and ask them to hit their floor. My family was the doorman type, the doorman knew that when we walked in on shabbos he would press the button for us and walk away without us saying anything.

Unfortunately our building was filled with frummies, basically anyone who walked up more than 4 flights of stairs we considered “really” religious and our building was full of them. We would see them trudging up the stairs as we walked down in our shabbos afternoon attire “shorts, t-shirts and baseball glove”, but what really irked us was when they “caught” us taking the elevator on shabbos.

You see my father was kind of known around the neighborhood as a learned fellow, he was also one of the old school guys who could flow with the Chassidim in the Vorhand Shteeble, yet he wore jeans and baseball hats during the week. So whenever we took the elevator up to our 8th floor apartment we made sure no one was coming. I myself felt kind of awkward when the Korassics would show up in their shabbos hats and wigs and we were standing in the elevator in our shabbos clothes waiting for the damned door to close.

The door on our elevator took forever to close, so for about 1 minute while we waited for it to close we were sitting ducks, any frummies walking to our side of the building would see us and we would be ashamed for being so non-frum by taking the elevator. In later years by brother and I would walk, but boy was it ever awkward when we had guests who refused to take the elevator (we rarely had such guests, but I recall we once did)

The other awkward thing about taking the elevator on shabbos was when you could hear people in the lobby with a bunch of bags saying hold the elevator. We would watch in horror as they just made it and we didn’t hold the door, I’m sure they stood there wondering what the hell was wrong with us.

← Television: A cry of anguish and appeal to out Jewish Brethren
Just a small piece of my Yeshiva Memoir →

49 comments for “Getting caught taking the elevator on shabbos”