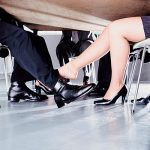 Many people I know keep negiah, they brave the dark waters of celibacy and refrain from touching the opposite sex until marriage. All of a sudden these same people are seen hugging women, sometimes kissing them on the cheek and I even get these random late night phone calls from supposedly shomer negiah folks who just got some action. Based upon my experiences there are many sub-categories within the folks who claim to keep negiah.

Shomer Until Opportunity: This crowd is very common I have noticed, these are the folks  who are 100% shomer until they wind up at some after work party with some hottie hitting on them. The second the women show interest their once fervent stance on keeping negiah is lost to the prospect of some steamy action. I think that many of these folks are the types that have hooked up with girls/guys in the past and know how good it can be. These SOU’s tend to not be the lifelong negiah types. The folks who tend to be SOU’s are usually older singles, Modern Orthodox Machmir, flexidox and yeshiva rebels who frummed out in Israel- sorta.

Shomer N’fooling Around: These folks are shomer when it comes to getting intimate, but when it comes to having folks sit next to them, put their arms around them or give them hugs they see no problem with this. Also part of this crowd are those folks that think sleeping in the same bed with their “good friend” of the opposite sex- is no problem at all and they are just friends.

Shomer Until Engaged: I can definitely relate to this category, I was engaged after all and have come to the conclusion that unless you live in a community with separate sidewalks for men and women- you have probably experienced this sort of thing. I have spoken to many friends of mine many of whom are full time Kollel and Rebbe types who have confirmed my suspicions. Most of them deny getting all hot and steamy in the back seat of their blue and wood paneled Chevy wagons held with bungee cords, but they do admit to holding hands and making out in dark corners of the top floor of the midtown Marriott. I guess if you were shomer until you got engaged you have to be higher then the MO-dox

Shomer By Default: If you could get some you probably wouldn’t be shomer, but since you’re too stupid to figure out how to use chat rooms, the casual encounter ads on craigslist and the poking mechanism on facebook you have resigned yourself to a life of free porn and staring at women over the mechitza. This category is filled up by nerdy and ugly folks who think they don’t have a chance in the world to get some action. Let me tell you something, anyone can get some if they tried just a little, or were willing to pay for dinner. These are the type of folks that never speak up when their friends are conversing with someone from the opposite sex and usually their friends are too rude to introduce them.
Shomer Cock Tease: I know it’s hard to believe that this exists, but it does. Some women just love to see men squirm and wonder how such beauty could be saved for some guy in the near future. These women tend to be future hot chanie and sheitle hooker types unless they already are. They prance around all hot and done up, yet they act like they are all frum by telling you they are shomer- almost spitting it in your face in fact.
Shomer In Public: They act shomer, but didn’t you just see them hug that person or give them one of those reassuring massages that is basically a come on without actually doing anything to frontal. I know plenty of these folks, they are with their girl/boy friends and they don’t touch, they even sit a little away from each other to act all frum and then boom- a casual look under the table will reveal all hell is going on under there. Footsie aint like it was when I was growing up.
Extreme Shomer Negia:I had this Rebbe in high school who would clear a line of people whenever him or his wife had to exit shul. These are the types that slam your change down on the counter rather than drop it in your hand. These types also avoid eye contact as if that would make them want to jump your bones and they try and act as rude as possible so you don’t try anything stupid. These folks tend to identify with the charedi movement and agree with the Saudis on many of their shomer negiah policies besides the honor killing stuff.

Shomer Besides Hand Shakes: Classic modern orthodoxy and even some of the frummier types will shake a woman’s hand when the time calls for it. The only problem is that it’s common for many cross sexual divide handshakes to end in sex.

Shomer Until Drunk: I have a bunch of friends who would hook up with girls at parties when he got drunk. This one guy would call me up and tell me he did something stupid and I knew exactly what it was, then he would learn some mussar and go about his business with that feeling of guilt they pound into you during yeshiva.


Militant Shomer Negiah: Does your town have one of those Vaad Hatznius organizations that believe in threatening people because they may not keep to extreme chumra tznius? Have you heard of guys/gals being beat up because they were seen talking to each other? Separate halls at weddings for the men and women, since the Berlin Wall style mechitza’s are just not enough? When all else fails, the charedim take to the streets to protest some sort of event in which guys/gals may see each other. These are the type of folks who would rather see intermarriage then have groups like NCSY and any other sort of coed programs. They also tend to believe in complete separation unless its child conceiving time, basically the women slaves over the child rearing and food making while the man slaves over a gemara or diamond counter. Looking at the opposite sex is counted as breaking shomer negiah.


Shomer Until Horny: The folks who are hardcore shomer until they cant take the pressure anymore. I am sure many of you may feel the same way. In fact I was at the Homowack with my father a few years ago and I met two single girls in their late 20’s. We got into a conversation about being shomer negiah and they revealed that besides holding hands they, like many good bais yaakov girls had never touched a guy. They also revealed that they had made a pact, not unlike the one in the first American Pie, in which they had both agreed to go out and have sex if they weren’t married by 30, I said why wait? They haven’t contacted me as of yet. Since many bloggers happen to be single women I am curious if many of them feel this way. I also wonder about those frum older singles- are they similar to the 40 year old virgin movie?

Fictional Negiah: I have definitely been in this category myself, it’s when everyone thinks you’re shomer negiah, but you’re not. If you’re good you can really fool some people, make sure to act uncomfortable when your “partner in crime” sits right next to you on the couch by placing pillows as a makeshift mechitza and if you have her sleep over, just pretend she slept at your rebbes house.

Semi Fictional Negiah: This is when your friends know you don’t keep negiah, but your family, rebbes and generally older folks think you’re just a good frum guy/gal who is shomer. This can always get hairy (no pun intended for spechardic folks) if you sleep at your buddies house and your folks want to know where she stayed and all that jazz.

Selective Shomer Negiah: I know girls who use negiah as a defense mechanism, they tell some sleazy guy getting all close to them at a party that they are shomer and watch as his expression goes from big bad wolf to “how the hell can I get out of here?” Then you have girls that are just saving it for the right guy – I got to thinking about this girl I had a crush on a few years ago – I remember how crushed I felt when she told me she kept negiah, I was heartbroken – all fantasies were out the window. You could only imagine how crushed I felt when I saw her making out with some dude. And that’s selective negiah.

This was originally posted well over 3 years ago, it has undergone some editing, additions and modifications.

← Moshiach is on the way — seriously!
Modern Orthodox and Frummies operate on the same principles →

62 comments for “The Unofficial Guide to Shomer Negiah”