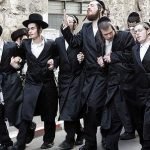 This was sent to me by a lawyer in NY who started a correspondence with me a few weeks ago and in his initial email to me he called me a virtuoso. I’m honored and the insights he shares below are actually quite interesting – I received permission to post this.

Hi Hesh- I was thinking about your observations about the differences between Modern Orthodox behaviors and those of the frummier types. For instance, MO will swim and play ball on shabbos, not wear a kipa at work (among other places), women wearing pants and shorts. The frummier people (yeshivish) will smoke, eat unhealthy food, be racist. And the things that I identified that one of these groups do, the other group looks down on, to say the least.

It seems to be that both groups are actually, and unbeknownst to them, operating on the same principal, but just coming at it from different perspectives. To explain or justify their behavior on these things, if challenged, each is saying in effect; “show me where it’s not permitted to do this?” The MO say, there is actually no prohibition on swimming or playing ball on shabbos; it’s only the things that people associate with these activities that are not permitted (wringing out a towel, playing ball without an eruv etc). The frummies will say the same thing—it doesn’t say anywhere that you can’t smoke and as long as it’s kosher, I can eat 10 millions gram of fat and salt a day if I want. And where does it say that I have to like [fill in the name of any ethnic group]? The MO will respond to the frummies on these things, the same way the frummies would respond to the MO on their activities; “There are broader principles at work that prevents us from doing these things.” So, for example, the frummy would say that playing ball on shabbos violates the “ruach” of shabbos where you should be learning, davening etc. The MO would say to the frummy, keeping yourself healthy is a basic principal of Judaism (“shamor et nafshecha meod”).

So for the MO and the frummy, each is only observing that which they have been taught to emphasize. For the MO, ritual observance will come in second place as long as there is no explicit prohibition that is being violated. For the frummy, lifestyle choices will come in second place, as long as no explicit prohibition is being violated. To me, that pretty much sums up the differences among the various Orthodox (and some non-Orthodox) groups. What area of observance have you been taught to emphasize. If it’s tsnius, kosher and shaboss, then you are a frummy and all these other broader social issues are pushed aside. If you have been taught to emphasize that contributing to the world, gaining intellectual insight, taking care of your family emotionally and physically are important Jewish values, then a few ritual details can be pushed aside as long as nothing egregious is being violated.

Which brings me to my last point. Given the broad range of mitzvoth that are in the Torah, from not gleaning the corners of your field so that poor people can take the left-overs to honoring your parents to all the ritual practices, how can all of these observances, and the sensitivities that go along with them, possibly be understood and observed by plain old folks? In my opinion, that’s why there are communities that emphasize one type of mitzvah over another, because those mitzvoth fit more to the character and proclivities to that community. So a Western educated community will find it easier to understand and perform mitzvoth that are more in line with Western thought (self improvement, tolerance of others) than a community that relies heavily on Eastern European customs.(modest dress, separation from gentiles). I think it would go a long way to healing the divides among these communities if they were aware that they all are choosing what parts of Judaism they are emphasizing, and that nobody can claim to be a complete adherent to the whole of torah.