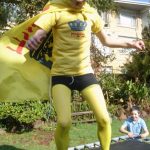 Every time a big calamity happens in the world or more specifically to the Jewish community, people love to say that Moshiach must be coming soon. Didn’t they here that he/she isn’t coming until 2012 — or was it 6000? Wait, we couldn’t even get the 40 day count for Moshe Rabeinu right, how on earth do we expect to get this Moshiach count right?

Well every time someone says that Moshiach1 is on his way I think of the movie The Island. The Island is about a bunch of people who think the world has been destroyed by Nuclear war and that their only chance to ever see the real world is if they win this lottery for the Island. The lottery seems to be random and every day someone else is cheered on their way to the island – limited space is available because it’s not so big. Soon, some smart folks find out that the entire scheme is one big insurance policy and the Island is just an operating table where they harvest needed body parts and organs to give to high paying customers who had this company make a clone of themselves so they never had to worry about dying.

So much talk about Moshiach has over-saturated the subject. If I were Chabad I would have gone off the derech2 years ago because of their constant discussion of Moshiach. I would think that Moshiach may be a mythical creation of the Rabbis to keep us in check and to sell yellow flags — good thing I have the 13 principles of faith1 in my siddur to keep me in check, right?

Then again, I have been floating around this theory in my head that I am going to get up to the heavenly court and God is going to look like Santa Claus1, laughing his ass off at me when I say that I did all of that he commanded. At that point he would turn to me and say, “Oy, we have another Jew!” He’d then show me all of the craziness I did for nothing. Come to think of it, that is one of my biggest fears, yet I keep on trucking through the maze of apparently authentic Judaism because if I stop doing it because I don’t understand, I won’t strive to understand it and it will just fade from view.

Moshiach — One of the primary principles in Judaism is that a spiritual redeemer will come forth and bring the Jewish people back to Israel. For more, see Judaism 101: Mashiach^
Off the Derech — a term that refers to being no longer religiously observant, having previously been religiously observant.^
13 Principles of Faith — printed in just about every Orthodox prayer book, this is a list of the thirteen basic tenets of the Jewish religion. For more information and to see the list, see here^
Santa Claus — A jolly elder man, “pleasantly plump”, who apparently goes out once a year to give presents to children of the Christian faith and then eat cookies and milk. Would he like cholent? Who knows?^

66 comments for “Moshiach is on the way — seriously!”