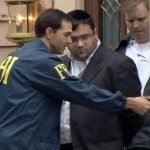 Just hours after the FBI and IRS stormed the Lakewood home of Reb Eliyahu Weinstein a fellow frum yid, father of many children and baal chesed, the Eli Weinstein benefit album was already being recorded. Eliyahu Weinstein is one of our own, a true tzadik from Lakewood ir hakodesh There are asifas going in Lakewood right now concerning this grave crime another anti-semitic trial will undoubtedly take place and we yidden have to join together and be dan l’kav zechus in times of crisis when the world wishes to point its fingers and call us fraudulent, thief’s – Eli Weinstein is not a fraud he is mosser nefesh for b’nai yisroel.

Did we mention that Eliyahu Weinstein gave a ton of tzedaka and that he is a loving father and husband? We will have video created shortly to show this as we show slide-shows from overpriced simchas in which he danced with his lovely children. What will these children do for shidduchim if their father is on trial and made a mockery for all to see. What will the yeshivas which Eli created and supported do with his funding? Will Lakewood be able to support all four coffee rooms without the help of Rabbi Weinstein?

We ask you all to please contribute generously to the Eli Weinstein Pidyon Shvuyim fund and to help us banish the anti-semitic court system from trying him. Don’t you think he deserves better.

Eli Weinstein was arrested on August 12th for a ponzi scheme that may have netted as much as $300 million, some have called Eliyahu Weinstein the next Madoff case and as can be expected – some frum Jews feel that you can steal in order to give tzedaka – at least that what the comments on Vos Iz Neias look like.

Read more on Business Week and at Failed Messiah