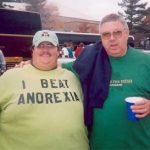 I am sure you can relate to this, as you and I are both very physically active and health conscious.

I have been bothered for years by the lack of healthy eating and physical activity of the frum community, I have wondered when people would start calling the overwhelming amount of out of shape people in the frum community the Obesity Crisis – it seems a lot more important than the visiting day issues that people have one day a year – yet it hasn’t gotten much attention anywhere and I just found out why.

My wife and I had some folks over for Shabbos and they practically had a heart attack (by looks of the kids I wouldn’t be surprised if they didn’t have one already) that we didn’t have any soda. They seriously thought we were joking when we brought out water and iced tea, when he drank the iced tea the husband had to keep himself from spitting it out as he proclaimed “what the heck is this stuff” I told him that was what iced tea tasted like and he said he had never had an iced tea mix that tasted like that. We got to talking and it turns out he had no idea that iced tea was the same as hot tea – he had always thought it came in powder form.

So I have these three kids begging their mother to run home and get them soda and my wife and I are dumbfounded. The entire family was severely overweight and I could see the mothers cheeks swaying side to side and she assured them that the quinoa was the same thing as rice.

So like any frum Jew who’s mad at something I called up my rebbe and he told me some shocking news. He explained that due to the halachic issues surrounding looking good, many of poskim have actually discouraged exercise and that since being healthy led to tznius issues it was subtly discouraged in daily life.

In fact (you’re going to love this Hesh) did you know that certian frum events were instituted to make sure that we kept from being truly healthy, they didn’t want girls to focus on their image – midos are everything – events such as sukkah hopping, shabbos parties and pekalach throwing at bar mitzvahs were all created to get children to become used to noshing – I was shocked and I figured your readers may get a kick out of my story.

My Rebbe also explained that being healthy was out of the price range for most people. He failed to mention that by cutting red meat out of their diets they could save loads and that by buying bulk grains and shopping at farmer’s markets these families could save a lot of money, but I guess that may be assur because it would put the frum pizza industry out of business and frum people may actually have to think of fun things to do besides eat greasy food together.

83 comments for “Dear Heshy: Why are frum Jews so unhealthy?”