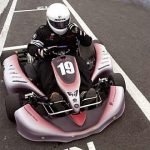 In order to keep the morals of society from spinning downward like the rest of the world, many ultra orthodox groups in Israel ban women from driving. Women simply drive like maniacs according to most Rabbis and driving like a maniac gives them undue attention, regardless of whether that attention is angry middle fingers pointed at these women while they try and navigate the treacherous streets of Mea Shearim, it is attention and we don’t think women should have any attention – we do allow attention to the by-products of women – mainly food and children.

Morals have been high, gay parade attanedance is down and that is directly related to the ban on women driving, but we have an issue. We have heard the disturbing news that girls have been go-karting, which is in fact more immoral than driving – mostly because it is fun and the lower position on the seat combined with an open air cocpit make for a very pritzusdike situation. This is without taking into factor that the go-karting is still coed – which is unacceptable.

I would just like to take the time to announce that we have heard of another kiddush Hashem being made in Emmanual by a Rabbi who undertook the humble prospect of making sure girls were not seen publicly driving go-karts. He heard of a group of girls who would be trying this new form of fun out to rebel against their families and damage their shidduch market value. He stormed the course risking life and limb and tore the girls out of the karts and then damaged them so no one could violate the laws of tznius again.

← Why the OU is opposed to same-sex marriage
Kosher Racism →