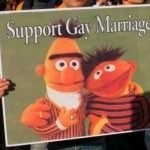 Ultra Orthodox groups were quick to blame the gays for the overturning of proposition 8, let us remember that this is nothing new. Orthodox Jews were quick to blame recent events such as Hurricane Katrina, the BP Oil Spill and the Tsunami on the homosexual community as well, citing the recent downward spiral in the morals of society as the cause of all of these events and the overturning of proposition 8.

Equal rights shmequal rights, Rabbi Avi Shafranowitz told us at a rally that was held to protest both gays and proposition 8 at the same time. “we have a shidduch crisis, yeshiva tuition crisis, visiting day crisis, internet crisis and the dorm fire damage at BMG in Lakewood, and these people have the chutzpah to thinking about themselves.”

Other Rabbis told us that they would have blamed the bestiality people too, but apparently society stopped just short of allowing them any more rights than they would normally have under law.